Student who failed to isolate faces lawsuit by Jeju governor

Student who failed to isolate faces lawsuit by Jeju governor 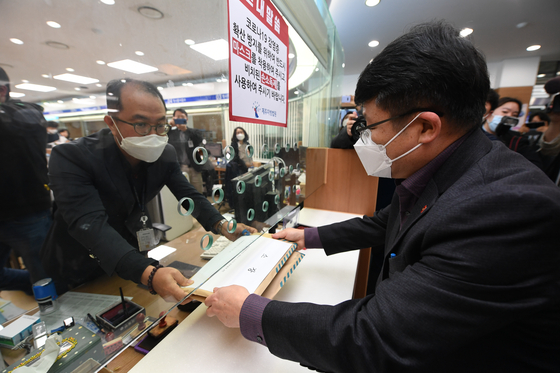 Jeju Gov. Won Hee-ryong on Monday announced he would file a lawsuit against a Korean student infected with the coronavirus for taking a trip across Jeju just days after returning from college in the United States.

In a briefing at the Jeju provincial office, Won said a total of 20 businesses were forced to temporarily shut down as a result of the student’s vacation on the island, and that 97 people had been placed under quarantine after coming into contact with her.

The student, a 19-year-old resident of Gangnam District, southern Seoul, returned to Korea on a flight from New York City on March 15. But instead of remaining at home in isolation as per the government’s public health warnings, she and her mother took a five-day trip to Jeju from March 20 until last Tuesday.

Officials investigating the case said the student complained of symptoms associated with Covid-19 on the last day of the trip and subsequently tested positive at a government-designated health facility in Seoul the next day. Her mother was also confirmed to have the virus on Thursday.

On CBS radio on Monday, Won said the Jeju provincial government is likely to seek more than 100 million won ($81,500) in damages from the student and her mother. The provincial government and six affected businesses will file a lawsuit Monday, but more are expected to join in the coming days, Won told reporters in Monday’s briefing.

Jeju is also considering filing a separate criminal lawsuit against the student for violating Korea’s laws on prevention of infectious diseases.

The incident provoked immense public ire online, with tens of thousands signing a petition on the Blue House website calling for the mother and daughter to be punished for ignoring government health warnings out of self-interest.

Further controversy was inflamed when Seoul’s Gangnam District Chief Jeong Sun-kyun held a press conference Saturday in which he appeared to defend the student and her mother by calling them “unintended victims” of the coronavirus outbreak.

Jeong said the student faced “immense stress due to a stringent academic schedule and school life” and that the duo had taken the trip to Jeju after plans to vacation in Hawaii had been canceled because of the virus outbreak.

The apology, however, only served to redirect public ire toward Jeong, who was slammed for being out of touch for inexplicably defending someone who had jeopardized the public’s health out of self-interest. Won too slammed Jeong for making comments that he said were meant to “evade [the] responsibility” of keeping account of the student’s whereabouts after her return to Korea.

Battered by fierce public criticism, Jeong was eventually forced to retract his comments and apologize for calling the student and her mother victims.