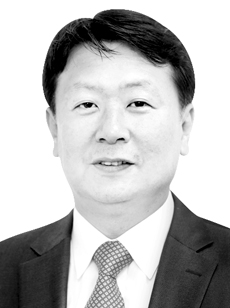 International relations experts are only interested in one thing these days. “How will the world change after the new coronavirus outbreak?”

Epidemics have created new international orders. The Aztecs and the Inca Empire collapsed due to smallpox spread by the Spanish military during the 16th century. The Roman Empire started to weaken due to outbreaks of the plague, typhus and smallpox.

Serious changes are expected from the coronavirus pandemic. Experts say the prestige of the United States as a global leader will weaken. In the post-war era, the United States has maintained the liberal international order with its strong national powers. But it failed to play its role this time.

For a global leader, three things were necessary. First, it should have set a model to fight the coronavirus outbreaks. But U.S. President Donald Trump failed to do so, and the country now records the largest number of infections. Second, it should have helped allies in despair. It should have supported at least Italy, but there was no help. Third, it should have led an initiative to create an international joint countermeasure system to fight the outbreaks. Trump, who has promoted the “America First” policy, had no such intention. In conclusion, the United States was not a leader in this pandemic.

China tried to take advantage of the situation. Although it used extreme measures such as shutting down the city of Wuhan, the epicenter, it is true that China is gaining control over the outbreak. The Xi Jinping administration, therefore, argues that China has been a success. It sent medical equipment and doctors to Italy and Iran. Furthermore, China created an online information center for the new coronavirus to share its knowledge with other countries. It plays the role of global leader once occupied by the United States. 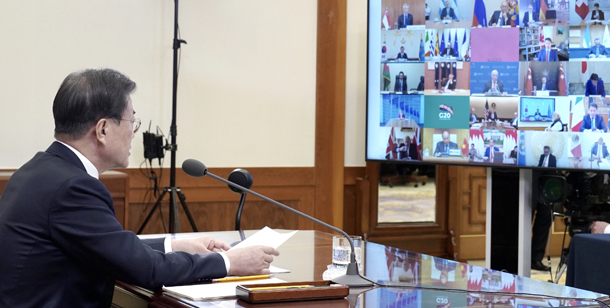 President Moon Jae-in talks with other Group of 20 leaders on Sunday about ways to bolster international cooperation in tackling the coronavirus during a video conference at the Blue House. [BLUE HOUSE]

The United States reacted temperamentally. The Group of 7 foreign ministerial meeting on March 25 failed to produce a joint statement as U.S. State Secretary Mark Pompeo insisted on using “Wuhan virus.” On March 19, a photo revealed that Trump had crossed out “corona” in his speech script and replaced it with “China” virus. It reveals U.S. efforts to blame China for the pandemic.

It is certain that U.S.-China relations will further worsen. When a rising power threatens an establishment, a collision is unavoidable as we see in Thucydides’ Trap. Countries that are in between, such as Korea, are destined to suffer.

And yet, it is important that each country’s crisis management ability was revealed through the outbreaks. Germany is located not far from Italy, but the fatality rate is 0.8 percent in Germany, while Italy records 10.8 percent. How can anyone say in the future that they were both advanced countries in Europe?

It may sound cruel, but deadly outbreaks are often a blessing to the survivors. After 30 percent of the European populations died in the 14th century due to the plague, survivors enjoyed booming economies. Wages went up while each family was able to occupy more land. It is no coincidence that technologies advanced rapidly to cover the shortage of labor.

A tectonic shift in the global order is expected as some countries were less damaged by the outbreaks, while others suffer more. For example, Japan may face chaos if Prime Minister Shinzo Abe’s warning is realized that its number of infections could increase by 30 times within two weeks if the disease spreads. If the country fails to stop community-originated infections, the situation will likely prolong. Korea may be able to benefit from the situation, because its export items largely overlap with those of Japan.

A positive national image always helps industries. Boy band BTS and the movie “Parasite” improved Korea’s image. We can also be seen as a smart country that is successful in disinfection.