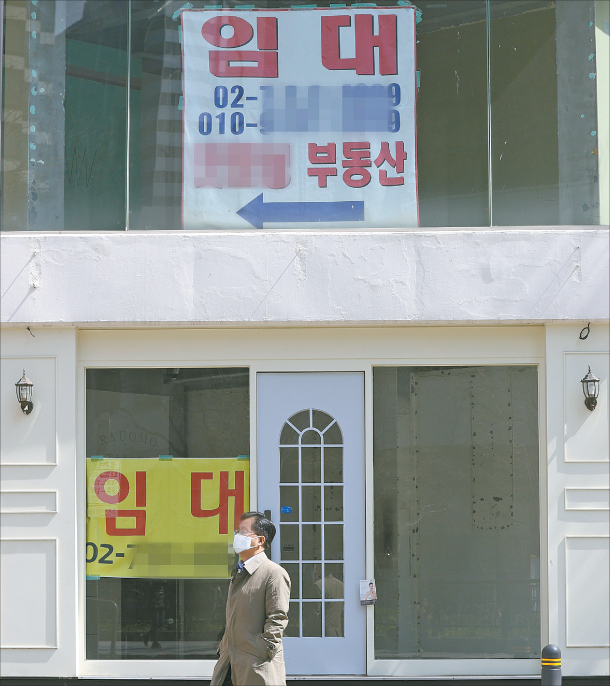 An empty storefront in downtown Seoul contains a sign seeking tenants on Tuesday. The coronavirus outbreak has pushed many small stores and restaurants out of business. [YONHAP]

Economic indicators from the month of February painted a bleak picture of business activity during the early days of Korea’s coronavirus pandemic, with the automotive, lodging and service industries faring the worst, according to government data released Tuesday.

Industrial output in February grew 4.9 percent compared with a year earlier but fell 3.5 percent from January, the worst single-month decline in nine years.

This is the sharpest month-on-month fall since the 3.7 percent decline in February 2011 when the country was affected by a foot-and-mouth disease outbreak.

The mining and manufacturing industry’s output meanwhile grew 11.4 percent compared to a year ago. When compared with January, it fell 3.8 percent - the sharpest drop since December 2008.

And the average operating rate of the manufacturing industry sank to 70.7 percent, the lowest rate since March 2009.

The last time the industry’s output fell that sharply was in July 2006, when it plummeted 32 percent due to labor strikes.

“While semiconductor production increased, the automotive and the machinery equipment industries fell, as there were shortages from automotive parts supplies,” said Ahn Hyung-joon, an official at Statistics Korea.

The service industry grew 1.2 percent in February on year but fell 3.5 percent since January, the biggest single-month drop since the agency began compiling the data set in 2000.

While restaurants and bars were heavily affected by the Covid-19 outbreak, the lodging industry reported its biggest-ever decline.

“The lodging industry saw a 32.6 percent decline [on month],” said Ahn from the statistics agency. “That’s the biggest decline since the data has been compiled.”

Restaurants and bars were both down 15.9 percent from January.

The lodging and restaurant industries’ woes began after Chinese officials locked down Hubei Province, which at the time was the global epicenter of the virus outbreak.

But after Daegu became a hot spot for coronavirus infections, social distancing and reluctance by consumers to leave their homes pushed February’s consumer spending down 2.3 percent on year. Spending fell 6 percent from January, the biggest month-to-month drop since February 2011.

Duty-free businesses have also been hit hard. Spending at those stores tumbled 36.4 percent on year, while department stores followed with a 21.3 percent drop.

Facility investment, meanwhile, saw a sharp increase of 15.6 percent. But that largely owed to unusually low investment from a year ago. When compared to January, it fell 4.8 percent.