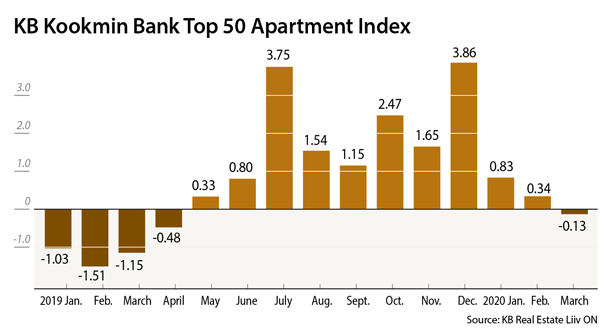 The new apartment market is in a deep freeze as coronavirus concerns weigh on demand, according to statistics from the Ministry of Land and Transportation.

That is down 65 percent from the same month last year, and 22 percent off of the five-year average.

In April, 53 apartment complexes were planning to hold pre-construction sales of over 52,000 units. These sales might also be delayed if the Covid-19 outbreak continues much longer.

Some sales might be pushed all the way to July.

Real estate may be in a bear market, some analysts say.

Its Top 50 Apartment Index fell 0.13 percent in March on month, the first drop in 11 months. The index tends to reflect the sentiment in the market overall.

Index constituents include: the Acro River Park in Banpo, Seocho District southern Seoul; Eunma Apartment Complex in Daechi, Gangnam District, southern Seoul; and Jamsil LLL in Jamsil, Songpa District. Outside of Seoul, three apartments in Gyeonggi and one each in Busan and Daegu are included on the list.

“The prices of apartments that lead the market seem to have turned downward. We consider it a signal that the market may be heading in a different direction,” said Hwang Jae-hyeon, the head of the real estate market analysis division of KB Kookmin Bank.

The pessimistic views on Korea’s real estate market are starting to have an effect on the price of blue chip units.

According to a real estate agent near the Jamsil LLL apartment complex, the price of an 84-square-meter (904-square-foot) apartment was 1.8 billion won ($1.4 million) this month, 300 million won lower than the market price in November.

A sort of panic selling has been observed at the Eunma apartment complex in Daechi, Gangnam District. Prices have dropped by 200 million won this month, and no deals have been closed, according to nearby real estate agents.

KB Kookmin bank argues this may drag down the prices of other real estate and put an end to the balloon effect, which inflated housing prices in areas free of new real estate regulations, such as Gunpo, Gyeonggi, Sejong and Daejeon.

The prospective price index is also instructive. Running from 0 to 200, it indicates the outlook for future prices as expressed by 4,000 real estate agents. If the index is higher than 100, it means that more property agents think prices will rise in the near term.

The index went below the 100 in March in Seoul, meaning more people expect the price to go down than up. Among metropolitan areas, the lowest readings were in Busan, Gwangju and Daegu, with the index reaching 93.

The index for Daejeon, which is normally higher than in other areas, was 116.

The prospective price index for the whole country dropped from 110 in February to 103 this month.

“The economic concerns sparked by the coronavirus are starting to have an effect on the real estate market,” said Ahn Myoung-sook, manager of Woori Bank’s real estate investment support center.

“The drop will start from refurbished apartments in Gangnam that saw the biggest increases, followed by other areas in an orderly fashion, from the outskirts of Seoul to the entire nation.”

While the coronavirus has discouraged trade in the market, it has pushed up the prices of jeonse, or long-term rent deposits. Jeonse prices for Seoul rose on average by 0.18 percent from the previous month.

In the same period, the jeonse price for the entire nation increased by 0.17 percent.