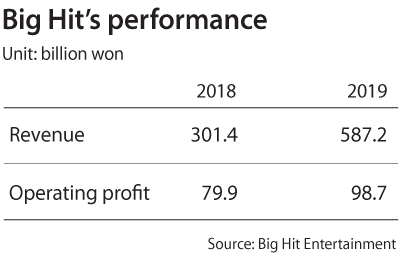 Big Hit Entertainment, the agency and management company behind boy band BTS, reported record earnings in 2019 as the albums of its artists performed well.

Sales were up 95 percent while operating profit increased 24 percent.

The outlook for this year is unclear, as the coronavirus outbreak has forced cancellations.

“[Big Hit Entertainment] canceled local tour “Map of the Soul” due to the spread of the coronavirus,” the agency’s audit report released Tuesday said.