[FUTURE SOUNDS] The key to a hit song in 2020? TikTok, YouTube and social media.

[FUTURE SOUNDS] The key to a hit song in 2020? TikTok, YouTube and social media. 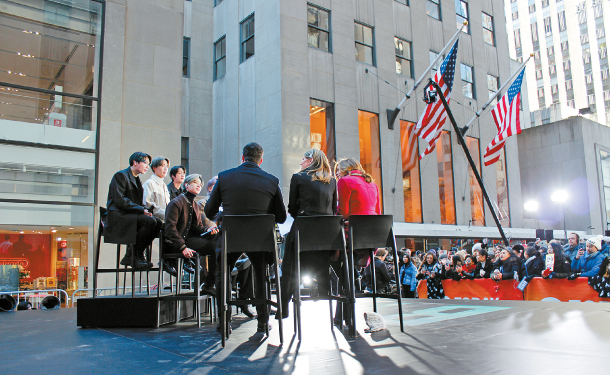 K-pop phenomenon BTS is interviewed by the hosts of NBC’s “Today Show” in New York on Feb. 21. [JOONGANG ILBO]

Ever wonder what goes on behind the scenes in the music industry? In Future Sounds, Space Oddity, a music creative group in Seoul that curates, promotes and studies the trends of the music world, will discuss the hottest topics being talked about inside the music business and recommend music and artists that are catching the eyes of people working in the business.

The way we consume music has certainly changed over the past decade. In the past, we had to purchase a physical album on vinyl, cassette tapes or CDs and remove the packaging to actually hear the music. But now, the whole world can enjoy newly-released songs simultaneously.

This transformation in how we consume music has also brought about a great change in how a song becomes a hit. We are living in a world where it seems like a new release isn’t enough, and artists today are doing whatever they can to grab people’s attention.

Three songs that recently dominated music charts - Korean rapper Zico’s “Any Song,” American singer-songwriter Lizzo’s “Truth Hurts,” and American rapper Lil Nas X’s “Old Town Road” - all have something in common. Prior to climbing the charts, all three songs were viral hits on social media thanks to challenges on platforms like TikTok.

For example, Zico announced the “Any Song Challenge” for TikTok with a video of him dancing along to “Any Song” with other popular singers. TikTok users instantly started uploading videos of themselves doing the dance, and by now more than 100,000 people have participated in the challenge.

In 2016, the American singer Post Malone first appeared in the music scene and quickly gained global recognition. Prior to his debut, Post Malone was quite a famous YouTube streamer of the video game Minecraft. To spice up his channel, he sang a few songs during one of his streams and they were well received by his fans. He went on to release major hit songs like “Rockstar,” and “Psycho,” and is now a big star around the world.

Korea saw rapper Psy skyrocket to global fame with “Gangnam Style,” which owes its success to YouTube. Until then, it was believed that only the well-trained K-pop groups with a large number of global fans could have a worldwide hit. In fact, it was difficult for them to do so.

But the eccentric Korean rapper’s horse dance craze took the world by storm through the video streaming platform. Today, the “Gangnam Style” music video has over 3 billion views and remains one of the most viewed videos on the internet.

As illustrated, songs that turn into memes online seem to gain global popularity these days. This phenomenon has led to many music critics trying to figure out the keys to success in the ever-changing music market.

Seeing the global success of boy band BTS, many insist that one critical factor to a local musician finding worldwide success is how well they communicate on social media. The critics cite examples such as creating a challenge on TikTok, an attractive video on YouTube and so on.

One crucial element is producing video content that corresponds to the characteristics of each social media platform. Musicians, whose focus might have been entirely on producing great music in the past, now have to do a lot more work if they want their music to reach more people.

Can this formula for success be applied to every musician?

The reality is, even before they are able to adopt these new strategies, trends are changing quickly and artists can easily miss out on their chance to capitalize on them.

For instance, when video on Facebook was receiving a lot of attention, there was a claim that smartphone users took just three seconds to decide to watch the clip or not. But these days, people spend hours holding their smartphones, even if their arms start to feel numb, in order to watch something.

An interesting phenomenon that occurs when people consume music through YouTube is that they encounter new music through an algorithm. If a user listens to a certain song multiple times, the service suggests similar songs, making it easier for them to encounter new songs from all around the world.

The Korean indie band Adoy, for example, may not be a familiar name for fans of mainstream pop music. But many of their songs are in fact being enjoyed by a large number of people outside of Korea. It’s not surprising to witness an American man singing along to Adoy’s “Wonder,” or South Americans going wild for the Korean band Rock’N’Roll Radio’s “Take Me Home.” In Korea, tickets sell out when the Taiwanese band Sunset Rollercoaster visits to perform, and Thai musician Phum Viphurit is gaining popularity among Koreans these days.

What these musicians have in common is that they continue to focus solely on creating great music. Trends continue to change and people continue to adopt and follow these new changes.

But one thing that’s certain is that people want to listen to great music. They did so back in the day and they still do so today. There are “success factors” that constantly get listed, but ultimately people always come back to consume great music.

*Hong Young-pyo is a producer at Space Oddity