Using the power of music to help sick patients: Violinist says the role of a musician in a time of hardship is to heal

Using the power of music to help sick patients: Violinist says the role of a musician in a time of hardship is to heal 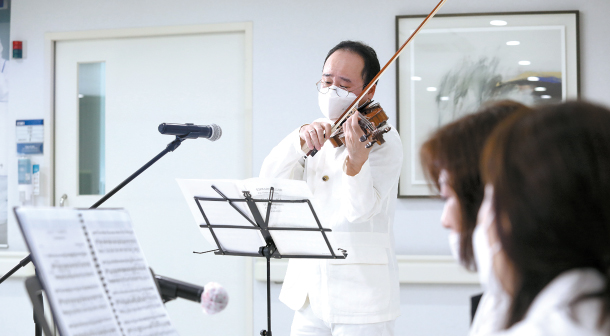 Won Hyung-joon plays his violin at the Myongji Hospital’s isolation ward in Goyang, Gyeonggi, where novel coronavirus patients are being treated, on March 27. [MYONGJI HOSPITAL]

On March 27, violinist Won Hyung-joon visited the isolation ward of Myongji Hospital in Goyang, Gyeonggi, where novel coronavirus patients are being treated. He was there not because he was sick, but to play his violin to hopefully heal the patients and medical workers through music. Cameras and microphones were set up in the ward’s corridor and the hospital gave tablet PCs to the coronavirus patients in the ward so they can watch the performance that was being staged on the other side of the wall.

While wearing a mask, Won played two pieces - Bach and Gounod’s “Ave Maria” and Elgar’s “Salut d’amour” - that would “hopefully console and cheer up the patients.”

Won, who is also the executive director of Lindenbaum Music, a project orchestra established in 2009 in the hopes of bringing together South and North Korea through music, was invited by Myongji Hospital to hold two concerts on March 27 - one in the isolation ward at 11 a.m. and another in the hospital’s main lobby at 2 p.m.

Lee So-young, the director of the Arts and Healing Center at Myongji Hospital, accompanied Won on the keyboard during the 11 a.m. concert and on the piano for the 2 p.m. concert. She invited Won to the hospital to put on the “Bedside Concert” and the “Covid-19 Extermination Lobby Concert.” 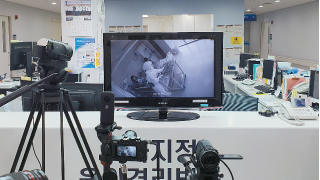 The screen shows a medical worker showing a coronavirus patient the “Bedside Concert” on March 27 using a tablet PC as the performance is held on the other side of the wall. [MYONGJI HOSPITAL]

“We prepared this concert with a heart full of hope, wishing that all of the patients fully recover from Covid-19,” Lee said as she introduced the concert on camera. “We also hope that the doctors and nurses and all the families of the patients can feel emotionally healed through the music we are about to play.”

In fact, Won helped kick off a wave of classical musicians who have streamed performances online during the coronavirus outbreak. On March 1, Won wrote a post on Facebook about the kinds of social responsibilities that musicians had in times of hardship, and two days later he livestreamed a solo performance of Thais’ “Meditation” and tweeted a link to his performance adding that he hoped to see other musicians follow suit and to “believe in the power of music.”

The Ministry of Culture, Sports and Tourism and the Korea Centers for Disease Control and Prevention both retweeted Won’s performance, and it was covered on the nightly news on KBS and published in the Kyunghyang Shinmun.

“Ultimately, Lee from Myongji Hospital saw the media reports and contacted me via Facebook,” said Won.

In one of the quarantined rooms on the other side of the wall, a Cambodian family including a mother, a 2-month-old baby and the baby’s grandmother, who were all sick, watched the duo’s performance.

“The patients told the hospital staff that they really appreciated the performance and that they were comforted, and the medical staff said that they could feel their tension easing as the music played,” said Won.

For the 2 p.m. concert in the hospital lobby, which was also streamed on YouTube, medical workers, patients and visitors who wanted to watch the performance were advised to stand two meters from each other to keep within the government’s social distancing guidelines.

“At a time when people are keeping their distance from others, those working in the medical industry are putting themselves on the frontlines of the virus, making sacrifices and working around the clock to fight against this pandemic,” Won said.

“As a musician, I also wanted to be socially responsible, and I believe music can help people overcome the emotional and psychological anxieties and stress that may occur from being isolated.”

“We should physically distance ourselves from each other as we fight the pandemic, but we should stay emotionally connected to stay stronger,” he added.