Ahn moved by act of kindness after time in Daegu

Ahn moved by act of kindness after time in Daegu

“The hospital was a battlefield,” said Ahn Cheol-soo, chairman of the minor opposition People’s Party, recalling the two weeks he spent volunteering at the Keimyung University Daegu Dongsan Hospital, where he treated coronavirus patients.

Ahn arrived at the hospital on March 1, by which time Daegu was the focal point of the virus outbreak in Korea and had declared a total of 741 confirmed cases of the virus. 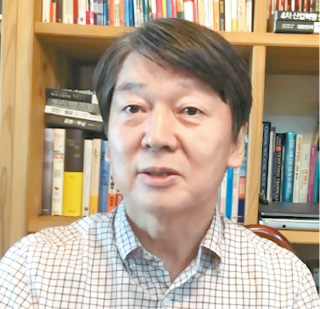 The JoongAng Ilbo conducted a video interview with Ahn Cheol-soo on March 18, four days after he had returned after volunteering to treat coronavirus patients in Daegu. [JOONGANG ILBO]

Upon arrival, Ahn was fitted into a Level D protective work uniform, consisting of coveralls, gloves, and safety boots. A doctor-turned-software-mogul-turned-politician, Ahn was no stranger to the medical scene. But it was his first time to be kitted out like this.

The hospital lobby was especially eerie. Although other areas in the hospital were busy, there was not a single person in sight in the lobby. Ahn could not believe what he was seeing.

“It was like one of those sci-fi films,” Ahn told the JoongAng Ilbo on March 18 via a video conference call, “The ones where the world is about to end.”

Ahn was on duty from 8:30 a.m. until 5:30 p.m. every day and worked in two-hour shifts. His job was to conduct examinations and collect samples from patients.

Although the work and hours were strenuous, it had its uplifting moments.

“I was moved,” Ahn said, “When I watched the patients, who had been suffering for so long, finally take off their hospital gowns, put on their normal civilian clothes, and take their first steps outside.”

Ahn returned to Seoul on March 15 and is undergoing self-isolation until March 28 during the two-week incubation period for the virus. From his home in Seoul, he is currently overseeing matters related to the upcoming April 15 general elections.

He recalled a moving gesture during this self-isolation period.

“One day, I found daily necessities, including tomatoes, apples, and tangerines, stacked outside my door,” said Ahn. It was later revealed that a resident of the neighborhood placed supplies there because it would have been difficult for Ahn to go grocery shopping during self-isolation.

When asked what he thought about the government’s response to the coronavirus outbreak, Ahn said, “Many people are walking a fine line between life and death. Finding a solution is imperative. Now is not the time to try to evaluate the government.”

Ahn also revealed his thoughts on how the outbreak will unfold in the future.

In the case of a major virus outbreak, two steps are essential. The first step is to set up necessary containment measures. “Although I think first place would go to Taiwan,” Ahn said, “setting up effective containment measures is something Korea was always good at doing.”

After containing the virus, minimizing its spread becomes imperative. Responsibility shifts from the government to the citizens. At this point, according to Ahn, it is all about the quality of medical staff, communication networks and the actions of the citizens. “However, I must say that we have been excelling in this regard.” Ahn noted.

The JoongAng Ilbo also asked Ahn about his opinions on the recent events leading up to the April 15 general elections.

Q. How do you feel about the new satellite parties that have become a major part of the elections?

A. The conservative United Future Party (UFP) and its satellite, the Future Korea Party (FKP), have been busy pursuing their own selfish goals, actions which eventually sowed internal conflict.

Meanwhile, the Democratic Party (DP) which has previously criticized the conservative parties for forming a satellite in order to garner more proportional votes, is now doing the exact same thing.

But on the general question of satellite parties and proportional representation, I believe it is up to the citizens of Korea to decide with their votes.

How do you feel about the Moon Jae-in administration?

President Moon Jae-in should start focusing on the truth of matter, not on the could-bes, whether the topic is the coronavirus or the economy.

Your approval ratings have gone up after your volunteer efforts in Daegu.

That was not the purpose of the visit. But when I met some of the citizens, I realized the extent to which the media has skewed public perception. I could not help but think that so much false information has been spread about me.

I have heard that you will aim for the proportional representation slots, as opposed to the direct election seats.

I have two priorities right now. My first priority is reining in President Moon’s reckless politics. The second is to popularize pragmatic centrist politics. Considering these aims, I figured that we should focus on the proportional representation slots.

Does the People’s Party have any plans of working together with the UFP?

Our chief aim is reining in President Moon’s politics. I am sacrificing our chances for direct election spots in order to achieve this goal.

What do you think of the anti-Moon coalition?

I do not practice partisan politics. Instead, I wish that Korean politics in general could dispense of the notion that “my own party is always right and the opposing party is always wrong.” As a result, I want the People’s Party to become a model for centrist politics.

Partisanship and polarization is already entrenched in Korean politics. Is it possible for a centrist party to survive in this political climate?

If you examine the two main political parties in the National Assembly right now, their chief aim is to win the elections and to use tax money to keep their party afloat. Other than that, they are only good at using PR to make themselves look good. The more you understand this situation, the more you realize that centrist politics is the only way to save this sinking ship.

What approval ratings are you targeting in the upcoming elections?

We are targeting an approval rating of 20% for our proportional representatives. This is equivalent to 10 to 15 spots in the National Assembly. This number should be enough to counteract the numbers in the opposing party.