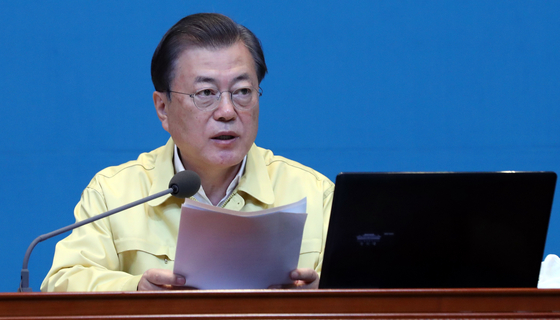 President Moon Jae-in warned of “strong legal measures” against anyone flying into Korea and violating the government’s self-isolation orders.

Several local government offices have complained of foreigners and Koreans arriving from overseas disobeying self-isolation rules and roaming around their neighborhoods.

At a cabinet meeting Tuesday, Moon stressed that it was crucial for everyone arriving from foreign countries to abide by the quarantine rules that go into effect today.

Starting today, almost all Korean and non-Korean nationals arriving from overseas will be required to self-isolate in their homes or at a government-run isolation facility for 14 days, the incubation period for the coronavirus, as the government tries to stop a recent surge of imported infections. 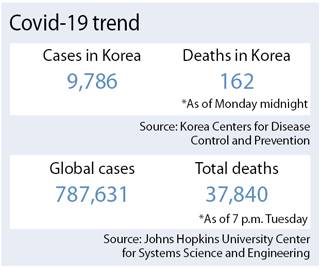 Exceptions are being made for a few specific visa categories, such as diplomats and their families, people visiting for official duties of a foreign government or an international organization and people who have received special waivers from the Korean government in advance for business or humanitarian trips.

“We need to take stronger measures and impose more thorough restrictions [on people arriving from overseas] as the number of imported infections grows,” Moon said Tuesday. “It’s crucial for them to abide by the two-week mandatory quarantine rule that goes into effect tomorrow.”

He added, “In case they violate the quarantine measures, [the government] needs to respond with stern and strong legal measures in order to protect the safety of the local community.”

Moon’s warning came as the Korea Centers for Disease Control and Prevention (KCDC) announced 125 new cases of the coronavirus in the nation Monday, up from 78 new cases tallied Sunday. Korea’s total case load now stands at 9,786.

A total of 162 have died as of Monday midnight, up by four from the previous day, while 5,408 patients have been declared fully recovered, up 180 from the day before.

The latest cluster in the capital, at a Protestant church in Guro District, western Seoul, grew larger Tuesday with at least 35 people found to have been infected with the coronavirus, up from 28 the day before.

One recent case connected to that church, Manmin Central Church, was identified as a worker at a call center in Geumcheon District, southern Seoul, whose two colleagues are adherents of the church and tested positive for the coronavirus on Sunday.

Seoul health officials are in the process of testing all 74 workers and trainees at the call center to see whether any contracted the disease, and as of Tuesday, 71 turned out negative, one tested positive and the rest have yet to receive their final results.

The latest cluster in Daegu at the Second Miju Hospital also grew to 134 cases Tuesday, up from 133 Monday.

In Yongsan District, central Seoul, officials said they’ve reported a Polish man in his 40s to the police for violating self-isolation orders by leaving his house, which he was not supposed to do after his Polish friend tested positive on March 12. The alleged violator tested positive for the coronavirus last Thursday, a day before his quarantine was about to end.

Officials said the Polish man lied about his violations and told authorities he had stayed home the entire time. After an epidemiological investigation, officials learned he left his home and went to a nearby supermarket and walked around a park. A Yongsan District official said he wore a face mask to the supermarket and doesn’t appear to have been in close contact with anyone.

At Asan Medical Center in Songpa District, southern Seoul, one of the capital’s largest hospitals, a 9-year-old girl tested positive Tuesday, prompting fears of another cluster.

The Seoul Metropolitan Government, meanwhile, said Tuesday it would offer 100,000 sets of face masks with replaceable filters to foreign students and workers in the capital who feel sidelined by the mask-rationing system launched March 9.