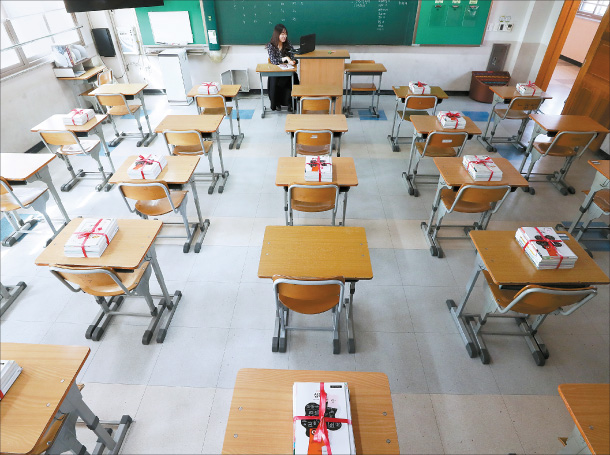 In a classroom without any students on Tuesday, a teacher gives a lecture online in a pilot project at Gosaek High School in Suwon, Gyeonggi. Education Minister Yoo Eun-hae announced Tuesday that the school year will start gradually from April 9 with online classes. [NEWS1]

As the country continues its battle with the coronavirus, the Ministry of Education has kept schools closed as part of nationwide prevention measures. The school year was supposed to begin March 2 and has now been delayed four times.

The ministry also changed the schedule for the all-important college admissions test.

This year’s College Scholastic Ability Test will be delayed by two weeks and take place on Dec. 3. High schools will be given 16 extra days to complete student performance records to be used for early admissions. The deadline for the records was delayed from Aug. 31 to Sept. 16.

The ministry said all teachers will return to schools starting Wednesday to prepare for online classes. The ministry will create a preparation team to offer support.

The ministry said it will offer electronic devices and internet access to low-income families. Families already receiving education subsidies - households with incomes lower than 50 percent of the median income - are eligible.

According to an ongoing survey by the ministry, which was 67 percent complete nationwide as of Tuesday, 170,000 students do not have electronic devices for online education.

“In our neighborhood, many children are from families where no member can offer assistance at home because both parents are working,” said an elementary school teacher in Gwanak District, southern Seoul. “Kids are good at using smartphones for gaming, but it’s hard for them to concentrate on online lectures without help.”

Students in rural areas without online access at home will be allowed to use facilities at schools after they are disinfected.

Subtitles, braille and sign language support will be included in online classes, and teachers will take turns visiting homes to help students with developmental disorders.

“We are facing new, unprecedented challenges,” Yoo Eun-hae, deputy prime minister and education minister, said. “Now is the time for the education community to show imagination and courage.”

“The academic year is disrupted, students are suffering from reduced opportunities to study and parents are experiencing heavier burdens of child care,” Moon said. “But we had to protect our children from an infectious disease and stop community spread.”

Moon said education authorities have been preparing online education programs. “Because we have no experience, it cannot be perfect on our first attempt,” Moon said.

Some parents are dubious about online education and thinking of sending their children to private tutoring schools - fueling the risk of new clusters of infections.

“Even when they are at school, kids don’t concentrate,” said a 48-year-old parent of a 12th grader in Yangcheon District, western Seoul. “I wonder how much attention my son will pay when he watches online lectures at home. My neighbors are increasingly searching for private tutoring.”

Schools may be closed, but eight out of 10 cram schools in Seoul are still offering classes. According to the Seoul Metropolitan Education Office on Monday, only 4,274, or 16.9 percent, of the 25,231 private tutoring institutes were closed as of Friday.

The government has been offering low-interest loans to encourage private institutes to suspend classes. It also announced an administrative order to enforce disinfection measures and seek reimbursement for damages if an infection takes place.