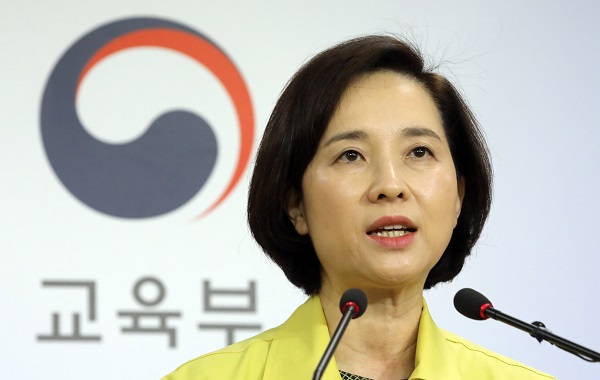 As the country continues its battle with the coronavirus, the Ministry of Education has kept schools closed as part of the nationwide prevention measures. The school year was supposed to begin March 2 and has now been delayed four times.

The ministry also changed the schedule for the all-important college admissions test. This year’s College Scholastic Ability Test will be delayed by two weeks and take place on Dec. 3. High schools will be given 16 extra days to complete student performance records to be used for early admissions. The deadline for the records was delayed from Aug. 31 to Sept. 16.

“Taking into account the mandatory period of classes during an academic year and college admissions schedule, it is not easy to give up the children’s right to study and indefinitely postpone the schools,” Prime Minister Chung Sye-kyun said during a government meeting.

Chung stressed the need for preparation for online learning. “All children must be guaranteed electronic education devices and internet access,” he said. “There should be a period to familiarize with the new system.”

Chung said the government canvassed opinions from education experts and parents. “Many said it is not yet safe to send children to schools, and disinfection experts agreed.” He said schools could become new clusters of infection.

Chung offered an apology for the unprecedented measure of starting a school year with online classes. “Although we tried our best to reduce the infection risks, we could not create a situation safe enough for the children to come to schools,” he said. “I apologize for this.”

“The academic year is disrupted, students are suffering from reduced opportunities to study and parents are experiencing heavier burdens of child care,” Moon said. “But we had to protect our children from an infectious disease and stop community spread. It was a decision reflecting the majority of the people including experts and parents.”

Moon said education authorities have been preparing online education programs. “Because we have no experience, it cannot be perfect on our first attempt,” Moon said. “But the government must work hard with teachers to proceed with the plan without disruption.”