Exports return to negative territory in data for March

Exports return to negative territory in data for March 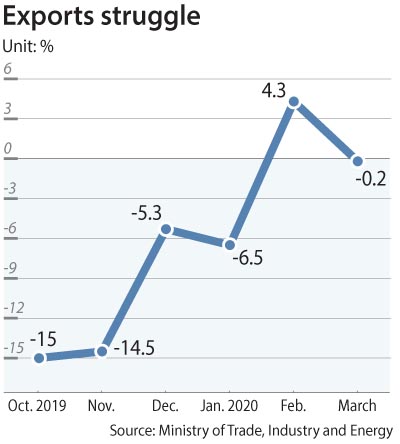 Exports, which turned around from a 15-consecutive-month decline in February, dipped in March.

Even semiconductor exports, which saw a 20 percent increase a month earlier, fell 2.7 percent in value terms. But in volume terms, shipments were up 13.1 percent in March compared to the previous year.

The Ministry of Trade, Industry and Energy on Wednesday reported that exports in March fell 0.2 percent compared to a year ago, reaching $46.9 billion.

This compared to a 4.5 percent increase in February.

Imports fell 0.3 percent to $41.9 billion, resulting in a trade surplus of $5 billion, the 98th straight month of trade surpluses for Korea.

Shipping was hit hardest, declining 31.4 percent compared to a year ago. Exports of displays fell 12.8 percent.

The government said the impact of the coronavirus outbreak on March’s exports was limited.

“Uncertainties resulting from the global spread of Covid-19 including slowing global growth, falling international oil prices, expanding volatility of the financial markets and damage to the global supply chains had a limited influence on our exports in March,” said Na Seung-sik, director-general for international trade policy at the ministry.

Korean companies’ swift changes to their export strategies may have helped, including shifting their focus to Asean markets, as well as the government’s offers of support in trade finance and marketing.

For two months in a row, Korea’s exports in volume terms grew. Volume growth in March was 13.1 percent, the largest increase in 17 months.

In volume terms, exports of semiconductors in the first 25 days in March grew 27 percent compared to the previous year. That was the ninth consecutive month of growth in volume terms, thanks to growing demand for chips for servers as data traffic surges with many people around the world being forced to work from home.

Chip exports fell in dollar terms because unit prices were 35 percent cheaper than a year earlier.

Automotive exports grew 3 percent when compared to a year earlier, the first turnaround in three months, thanks to exports of new SUVs to North America as well as the popularity of environment-friendly vehicles. Export to the United States grew 12.1 percent. Korea claimed 7.9 percent of the U.S. automotive market last month, a 0.7 percentage point increase from a year earlier.

The bigger issue on the horizon is the pandemic’s effect on major Western markets including the United States.

“We expect April exports to be difficult with Covid-19 spreading to places other than China such as the United States and European Union,” Na said.

During an economic ministers’ meeting on crisis management in Seoul on Wednesday, Finance Minister Hong Nam-ki predicted the full impact of the coronavirus on Korea’s exports will be felt in April.

“[The government] will focus our policy efforts in resolving obstacles to exporters while preventing disruptions to global supply chains,” he said.