A consumer contemplates a box of Choco Pies at a supermarket in China. [ORION]

The mighty Choco Pie has outdone itself, becoming the hoarding item of choice for Chinese consumers, especially parents stuck at home with kids during the coronavirus outbreak.

With a shelf-life of six months - some sources hinting that they might be good for up to a year - a taste that consumers globally swear by and potential value as a currency in some parts of the world, the chocolate-marshmallow delight is the perfect item for the well-stocked survivalist, or parents at wit’s end.

According to the company, February sales at Hebei-based Orion Food, the company’s Chinese subsidiary, jumped 53.2 percent on year to 50.7 billion won ($41.2 million) in February, while profits rose to 4.6 billion won from an operating loss of 2.6 billion won last year.

The company said that it is running its plants in China at 90 percent capacity.

Orion executives believe demand is so strong because people are hoarding the product during these times of uncertainty and families are looking for a food that appeals to their children.

March numbers have not yet been released, but they suggested that sales will continue to be strong into March. 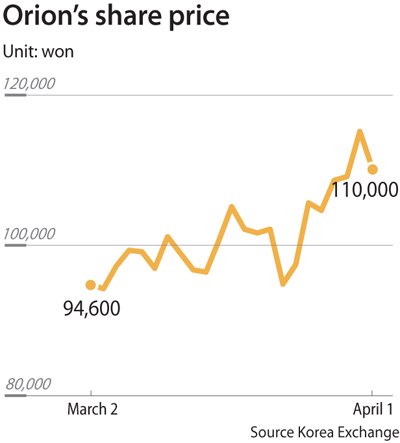 Daishin Securities estimates that 10 percent of Orion products in China are now sold online, up from about 7 to 9 percent last year.

As was the case for many companies with manufacturing in China, where Orion has been active since 1993, concern was that production would be hit and results would dive after the government extended the Lunar New Year’s holiday due to the coronavirus outbreak.

When the holiday finally ended, Orion was pleasantly surprised. It found that demand was strong in China and that distributors had burned through their inventory and needed to restock.

CJ Cheiljedang, the domestic home meal replacement champ, reported that March sales in the United States had more than doubled on year for its signature frozen dumplings, which are sold under the Bibigo brand name. Its Schwan’s frozen pizzas are also flying off the shelves.

The company says that its dumpling factories are running at full tilt and that capacity utilization is rapidly increasing at its pizza factories. It currently has 22 plants in the United States including those acquired when it bought Marshall, Minnesota-based Schwan’s last year.

Nongshim, the maker of Korea’s iconic ramen, can’t stop winning. Two of its products were featured in Oscar-winning “Parasite.”

Just as the “Parasite” boom was getting old, the coronavirus struck, and the Korean noodle maker has been working overtime to meet demand ever since.

“The virus spread in other countries just started to accelerate in late February, so there are also possibilities to generate further overseas revenue in the first quarter,” said eBest Investment & Securities Analyst Shim Ji-hyeon.