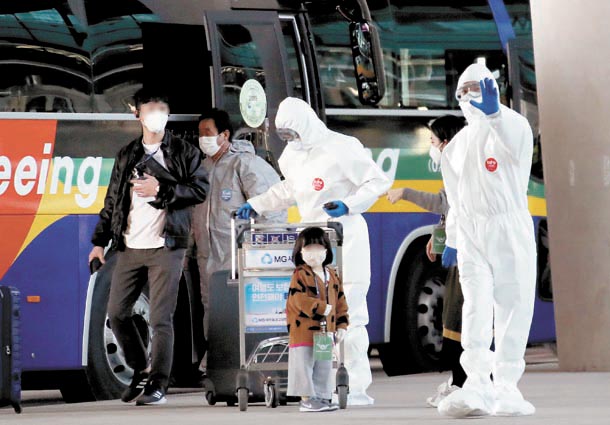 Koreans airlifted from Milan to Incheon International Airport board a chartered bus Wednesday afternoon to go to a quarantine facility for two weeks. From Wednesday, all arrivals from abroad, except certain visa holders, are required to be isolated for two weeks upon entry into Korea. [NEWS1]

A group of 26 Korean residents of Madagascar evacuated the African country amid the global coronavirus pandemic Tuesday on a civilian chartered flight shared with passengers of multiple nationalities.

The passengers departed from Madagascar’s capital of Antananarivo Tuesday on an Ethiopian Airlines chartered plane to the Ethiopian capital Addis Ababa, according to the Korean Embassy in Madagascar.

The 100-seat civilian chartered plane, arranged by the Korean Embassy, flew out a total of 97 passengers including American, Japanese, German, British, Australian and Norwegian nationals.

Initially, there were not enough Korean passengers to operate a chartered flight, but Korean Ambassador to Madagascar Lim Sang-woo reached out to embassies of other countries also looking to fly out nationals.

The Korean Embassy prioritized enabling the young, elderly and those most vulnerable to the virus to return back to Korea. There are around 240 Korean residents in Madagascar.

Madagascar confirmed its first coronavirus patient on March 20 and has 57 reported cases as of Wednesday.

The chartered plane landed at the Addis Ababa Bole International Airport in Ethiopia and the non-Korean passengers arranged commercial flights back to their home countries from there.

The Korean passengers were scheduled to transfer to a regular flight between Addis Ababa and Incheon International Airport and were set to arrive Wednesday.

This marks the first time Korea has organized such a civilian chartered flight with multiple nationalities to evacuate citizens due to the coronavirus situation.

“The Korean residents made a request to the embassy, but it was difficult to charter a flight with just 26 people, so our ambassador reached out to the diplomatic corps in Madagascar to see if there were more passengers interested in joining,” a senior Foreign Ministry official told reporters Wednesday. “Consequently 71 foreign passengers came on board […] and this was in large thanks to the efforts by Ambassador Lim Sang-woo.”

Plane-pooling is likely to become a more viable solution to get stranded nationals home as more countries shut off their borders and flights are getting suspended over the coronavirus pandemic.

There was a similar effort to fly out Koreans in Cameroon, including Korea International Cooperation Agency (Koica) volunteers, after they heard of the Madagascar case.

A group of around 40 Korean residents, tourists and Koica volunteers in Cameroon joined hands with a group of 56 Japan International Cooperation Agency (JICA) members also seeking to fly out of the country, according to the Korean Embassy in Cameroon. The embassy likewise arranged a similar civilian chartered flight to Ethiopia.

The group of 96 passengers departed from Cameroon on an Ethiopian Airlines flight chartered jointly by Koica and JICA to Addis Ababa Tuesday.

In Addis Ababa, they joined the group of Koreans who had flown in from Madagascar and took the same Ethiopian Airlines commercial flight to Incheon International Airport. The Japanese passengers from Cameroon continued their journey to Tokyo on the same plane after a layover in Korea.

There are around 130 Koreans residing in Cameroon.

The Korean government has encouraged its overseas citizens seeking to return home to try to arrange commercial flights or find temporary routes. A government chartered plane is usually the last resort, when other routes aren’t available, as is the case with the evacuation of hundreds of Koreans from Italy. Passengers are expected to pay back their airfare to the government.

The first batch of Koreans in Italy was evacuated from Milan Wednesday after weeks of seeking ways out of the European country currently under lockdown. The group of 309 Koreans and their family members who were airlifted from Milan Tuesday evening arrived at Incheon International Airport Wednesday afternoon on a government chartered Korean Air flight.