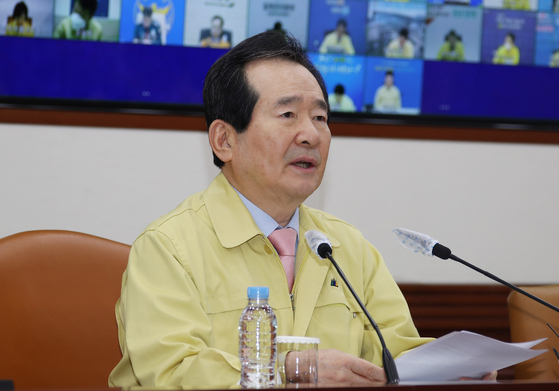 The prime minister Wednesday said he was worried about Korean students returning from overseas and not isolating themselves for two weeks, warning they’ll be “immediately busted” by local authorities if they violate mandatory quarantines. 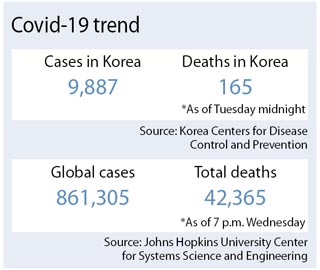 “People who arrive from overseas sometimes violate the self-quarantine rule because they don’t know about the domestic situation or feel relieved to have come back to their home country,” Chung said Wednesday during a meeting of the Central Disaster and Safety Countermeasures Headquarters, the Korean government’s task force fighting the coronavirus.

The government is “especially worried about the young students,” Chung continued.

The prime minister stressed any violators can be immediately tracked by an app that all people arriving from abroad have to download on their smartphones, which comes with a GPS function that informs local government offices when users leave their isolation areas.

Starting yesterday, almost all Korean and non-Korean nationals arriving from overseas have been required to self-isolate in their homes or a government-run isolation facility for 14 days, the incubation period of the new coronavirus, as the government tries to stop a recent surge of imported infections.

Exceptions are being made for a few specific visa categories, such as diplomats and their families, people visiting on official duties of a foreign government or international organization and people who have received special waivers from the Korean government in advance for business or humanitarian trips.

Several local government offices have complained of foreigners and Koreans arriving from overseas disobeying the self-isolation order and roaming around their neighborhoods and reported the cases to the police. Under domestic law, anyone who violates the government’s self-quarantine rule can face up to a year in prison or pay 3 million won ($2,440) in fines. Local authorities recently raised the fine to 5 million won and said the revised penalty will go into effect Sunday.

The Korean National Police Agency said Wednesday that investigations have been opened on 45 people believed to have violated the self-isolation order, including six who’ve already been recommended for prosecution. The Korea Centers for Disease Control and Prevention (KCDC) announced 101 new cases of the coronavirus in the nation Tuesday, down from 125 new cases tallied Monday.

A total of 165 have died as of Tuesday midnight, up by three from the previous day, while 5,567 patients have been declared fully recovered, up 159 from the day before.

The majority of Korea’s imported cases are from Europe at 53.2 percent, followed by the Americas at 31.8 percent, KCDC statistics showed.

The capital’s latest cluster at Manmin Central Church in Guro District, western Seoul, grew larger Wednesday with at least 41 infections traced to the Protestant church, up from 35 on Tuesday.

Asan Medical Center in Songpa District, southern Seoul, one of Korea’s largest hospitals, said Wednesday that no other person has tested positive at the hospital after a 9-year-old girl was diagnosed Tuesday afternoon. Some 500 people including those whom she was in contact with were put through virus tests, and they all turned out negative, the hospital said.

Doctors believe the young girl might have contracted the disease from The Catholic University of Korea Uijeongbu St. Mary’s Hospital in Uijeongbu, Gyeonggi, just north of Seoul, where she visited on March 25 to treat a headache.

At least 13 infections have been traced to the Uijeongbu hospital ever since an 82-year-old woman who’s been hospitalized there since March 12 first tested positive for the coronavirus on Sunday.