Bouncing back from a difficult start in K-pop: Actor Cho Hong-soo and singer Park Sang-moon are hoping for a second chance

Bouncing back from a difficult start in K-pop: Actor Cho Hong-soo and singer Park Sang-moon are hoping for a second chance 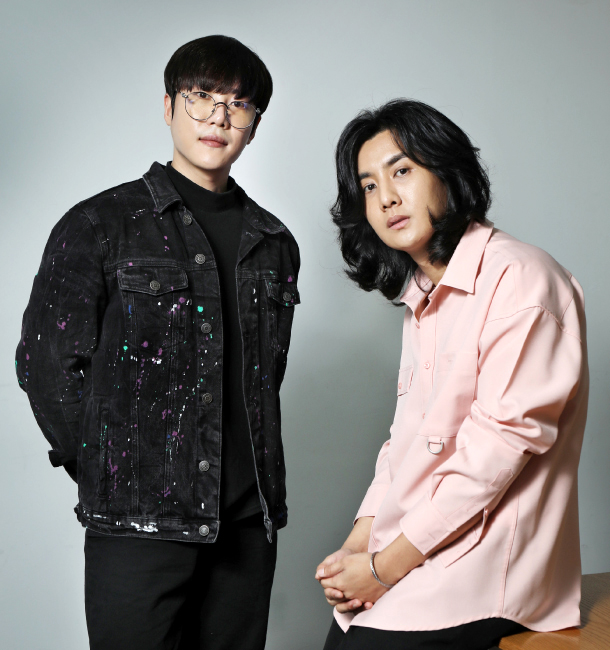 Singer Park Sang-moon who goes by the name Kiryeon (left) and actor Cho Hong-soo sit down for an interview with the Korea JoongAng Daily. [PARK SANG-MOON]

Actor Cho Hong-soo and singer Park Sang-moon are friends who met in the entertainment industry, united by one particular moment they have in common: They debuted years ago as a part of boy bands that failed to gain much attention, but they are paving their own paths nonetheless. While Cho debuted as a rapper in the boy band D.Caprio in 2007, Park officially began his singing career as a part of the ballad boy group ZentleZ in 2016.

Cho and Park sat down for an interview with the Korea JoongAng Daily to share their experiences of debuting as part of lesser-known boy bands and their ongoing journey back to the stage.

For Cho, born in 1989, debuting as a part of a boy band was never a dream. He had always wanted to become an actor, but when he was a teenager his agency suggested that he try out to be a singer and take it from there. He didn’t know how to say no and thought that it could actually turn out well for him in the long run.

“Back then was when singers from K-pop bands would start jumping careers from singers to actors,” he said. “I had been training to be an actor for two years, as well as singing and dancing, so I thought, why not give it a chance? I thought I could turn it around later.”

Performing didn’t come as easily to him as it did for the other members of the group, who had always dreamt of becoming K-pop stars. Even when he saw fans cheering for the group at its very first performance, the only thing he felt was “surprised that this was how K-pop bands debuted,” rather than feeling the overwhelming joy that the others felt. When he was singing onstage, the only thing he could think about was when he would be successful enough as a singer to finally make the transition to acting. 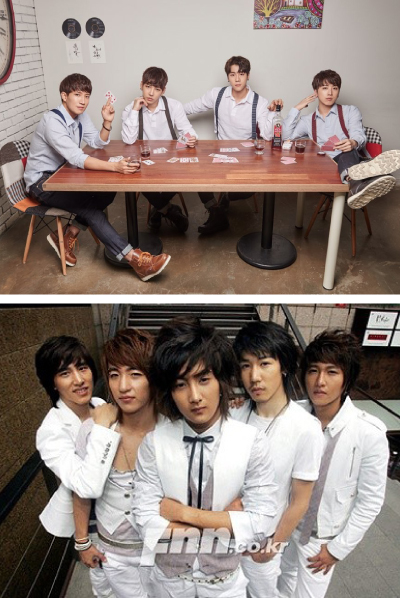 Top: Park Sang-moon debuted with ZentleZ in 2016. Park is second from right. Above: Cho Hong-soo debuted with boy band D.Caprio in 2007. Cho is in the center of the photo. [KIRYEON, CHO HONG-SOO]

“That’s when my anticipation started to turn into anxiety. I didn’t want to be a singer, and I knew that singing wasn’t the best of my talents. When our contract [with the agency] ended, the other members would be able to continue their careers in the music field, but that wasn’t going to be the case for me. When that time came for me, I wouldn’t be anything in particular — I would be nothing,” said Cho.

Thinking that he needed a fresh start, he told the agency that he wanted to quit the group. The other members of the group all quit with him, saying there was no point continuing without him. For the first few years, he was faced with the realities of starting from scratch. He landed roles at auditions and got spotted by the casting directors, but a lot of his projects got delayed or canceled due to the filmmakers’ situations. Every day that his phone didn’t ring made him feel worse.

“People say they think I would have had a rough time, but it was worse than what they think,” he said. “Both physically and psychologically, it was so hard. Each day was so hard. I felt like a failure, and my life felt like a failure. I had something I wanted to do so badly, but I couldn’t do it. But even then, I didn’t want to take on any other jobs. I felt like I could be given all the money in the world, and I still wouldn’t feel happy unless I could become an actor.”

Eventually, it was time that healed his wounds. He realized as the years went by — taking on any role he could for TV and film — that it was the days he lived that shaped him into who he became. Today, he is filled with gratitude. He was active in China in the early 2010s, but the diplomatic freeze between Korea and China brought him back home.

“I auditioned for a big piece recently, and I feel really good,” he said. “It’s tough for me. But [that happens] not only in the acting field. Everybody struggles in their world, and it’s up to us to feel grateful for the things we can. I know that I shouldn’t have just walked out on my band like that, because for the others, that was their true chance. I think about a lot of things I should have done differently, but now, all I feel is that I should live life to the fullest and be proud of having tried my best at every moment.”

Responsibilities of a father

Like Cho, Park, also born in 1989, debuted with a boy band that didn’t receive as much attention as it hoped for. He mostly worked overseas — mostly in Japan — but had to return due to the worsening diplomatic relations. And just like Cho, Park awaits a role to come with a TV show in the near days. But unlike Cho, Park never had dreams of being in the spotlight.

He didn’t have a clear goal or thought about what he wanted to do in life, but he realized that he was a talented singer and that he liked it late in his teenage years. His first single, “Live With Me” (2012) which came out under his stage name Kiryeon, turned out to be a success, and every time he heard it playing on the streets or people humming it, he thought that he was having a smooth smart.

“I started training as a singer in 2012 after I finished my military duties,” said Park. “I trained with Loen Entertainment, but that didn’t turn out well. I almost debuted with a group under two agencies, but everything was halted.”

After his years of training went to no avail, he started a small bar. But at 28 years of age, he realized that if he didn’t try again, then nothing would ever happen in terms of a music career.

“I was luckily picked up by Ulala Company, the agency run by band Ulala Session, and debuted there as part of a four-member band ZentleZ,” he said. “We first performed in Japan. I remember the day we arrived at the airport. There was so many fans there cheering, even screaming for us, and police had to escort us to our accommodation. I remember that day because there hasn’t been any other day like that since.”

Although ZentleZ started off smoothly, putting on more than 200 performances in Japan alone, it was soon pushed back by the swarm of K-pop groups armed with fancier tunes and choreography, leaving them to disband within a couple of years.

At first, it wasn’t so hard for Cho. He was appointed the honorary ambassador for the city of Gimcheon last year, which has helped him get invites to perform at school festivals and weddings all around the country. But since then, it’s been getting harder and harder to be able to release an album. And unlike Cho, Park is burdened by the reality that he is the breadwinner of his family.

“I have a little girl, who is both the reason why I have to succeed and also the reason why I can keep doing what I do,” he said. “Right now for me, even more so with the coronavirus, I haven’t been getting enough jobs lately to support my family. So I work at a rental shop that I run, work a parcel job from midnight to 4 a.m., sleep for a few hours and then get up and practice. Sometimes if I get called somewhere, I give up on sleep and practice while driving to the venue.”

For Park, his goal is clear: to make his daughter proud.

“I didn’t have any greed before. But now, I feel so much responsibility because I have to maintain my family. I love her, and she’s the reason I can go on. I would like to be recognized, and I want people to hear my songs. I want my daughter to be proud of me and see myself on TV with my daughter.”