Hwang Kyo-ahn, head of the main opposition United Future Party (UFP), faced fierce criticism Thursday for his comment that not everyone involved in the recent scandal related to an illegal pornography ring that enslaved dozens of women deserves the same punishment.

At a debate ahead of the April 15 general elections, hosted by the Korea Broadcasting Journalists Club on Wednesday, Hwang addressed the ongoing investigations into the pornography ring that used blackmail to enslave dozens of women, including children and teens, and distribute their photos and videos through the Telegram instant messaging app to paying members. Calling the case a “cruel and diabolical sex crime,” Hwang vowed that his party will work hard to punish sex offenders more strongly. 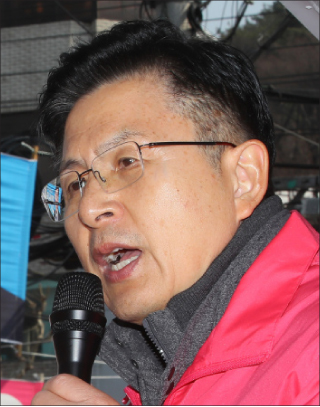 He then said different severities of punishments should be handed down to those involved in the scandal. While the operator and his accomplices deserve heavy punishments, one-time users should be treated differently, Hwang said.

“I think judgements can differ for the people who subscribed to the service out of curiosity, but quit because of its inappropriateness,” Hwang said. “Long-time users deserve punishments. Among the subscribers, those who knew the criminal nature of the service but chose to stay or participated in illegal activities must be punished.”

Hwang’s comments were made as demands for a tough stance be taken against the Telegram sex offenders grow. People are also calling for the full disclosure of the identities of not only the operators of the illegal pornography ring, but also its clients.

Following Hwang’s remarks, criticism arose that he has downplayed the gravity of the case. Because the subscribers needed to pay up to 1.5 million won ($1,200) in membership fees, critics said it was wrong for Hwang to mention “curiosity.”

Hwang issued a statement later Wednesday afternoon to clarify his position. He said he was offering a general opinion as an expert of law, stressing that no leniency should be shown to any suspect linked to the case.

The explanation, however, did little to calm the backlash. “Hwang’s insensitive remarks enraged the people,” said Rep. Kang Hoon-sik, spokesman of the ruling Democratic Party (DP). “It is not something you can join out of simple curiosity.”

Seo Ji-hyeon, a prosecutor and special adviser to the Justice Ministry’s Gender Equality Policy, also condemned Hwang on Thursday. “If a murderer said he killed someone out of curiosity or if a man said he raped someone out of curiosity, they will, of course, face different judgements,” she said in a Facebook posting. “You judge them as psychopaths. They will be isolated from society permanently. Curiosity can be this dangerous.”

Meanwhile, the official campaign period for the general elections started on Thursday. Voters will elect 300 lawmakers including 47 proportional representatives for the 21st National Assembly on April 15.

According to a Realmeter poll announced Thursday, the Future Korea Party (FKP), a satellite offshoot of the UFP, recorded the highest support for the proportional representation election. It is the first time that the conservative opposition beat the ruling DP in a poll concerning the general elections.

According to the poll, conducted from Monday till Wednesday, 25.1 percent of the voters said they will vote for the FKP for proportional representation. The Citizen Party, a satellite offshoot of the DP, won 20.8 percent.

The Open Minjoo Party, largely composed of controversial politicians and former members of the DP and the Moon Jae-in Blue House, recorded 14.3 percent. The Justice Party won 8.2 percent and the People’s Party 5.1 percent.

The poll had a 95-percent confidence level with a margin of error of plus or minus 2.5 percentage points. More details are available on the homepages of the Realmeter and the National Election Survey Deliberation Commission.

The DP and the Citizen Party held a joint ceremony to start their campaigns on Thursday. DP Chairman Lee Hae-chan urged the public to vote for the DP in their constituencies and for the Citizen Party in proportional representation, stressing that “a bird flies with two wings.”

It was Lee’s first public appearance since he was admitted to the hospital on March 27.