Arrivals who stay in Seoul must get tested for virus

Arrivals who stay in Seoul must get tested for virus 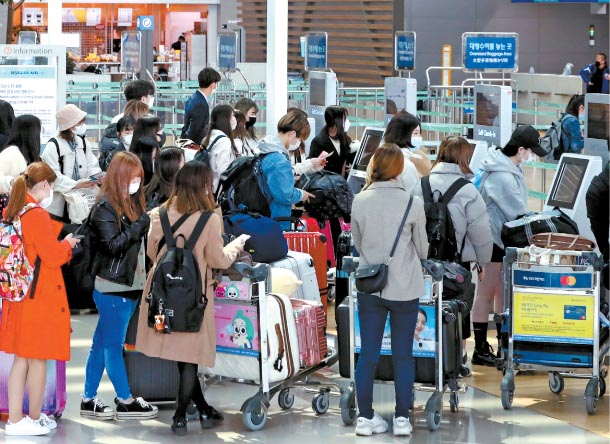 Passengers on a flight to Japan line up at check-in kiosks at Incheon International Airport Thursday ahead of a Japanese entry ban on travelers from Korea set to take effect today and last to the end of this month. Japanese Prime Minister Shinzo Abe announced Wednesday an entry ban on foreigners coming from 49 countries and territories, also including China and the United States, to tighten coronavirus quarantine measures. Seoul expressed regret for Tokyo’s decision and called for Japan to allow essential visits by businesspeople. [YONHAP]

Starting today, all Koreans and foreigners arriving from overseas who intend to stay in Seoul will be required to be tested for the coronavirus even if they have no symptoms.

Seoul Mayor Park Won-soon announced in a press conference at Seoul City Hall Thursday morning that anyone who plans to stay in the capital after arriving from a foreign country will have to be tested at the airport, their local community health center or a makeshift testing center that will be set up at the Seoul Sports Complex in Songpa District, southern Seoul.

The city is strongly recommending incoming travelers to get tested before they go to their homes. 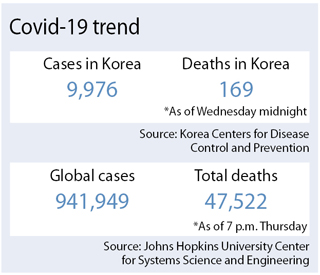 Rides on limousine buses will be offered at Incheon International Airport to bring arriving passengers to testing centers.

Seoul’s new guidelines are more rigorous than the central government’s, which allow asymptomatic Koreans and foreigners arriving from a foreign country other than Europe to forgo a virus test unless they come down with symptoms.

Park explained Thursday that the city has decided to test all incoming people because a large number of the travelers arriving from abroad were coming to Seoul.

By 10 a.m. Thursday, there were 494 coronavirus patients in the capital, 158 of whom contracted the disease outside Korea, or about 32 percent.

In recent days, about 7,000 people have arrived everyday in Korea from a foreign country and about 1,600 stay or live in Seoul.

Park said the Seoul Sports Complex is capable of testing about a thousand people daily.

Several other local cities including Daejeon and Gwangju have announced similar guidelines this week that require incoming Koreans and foreigners to be tested immediately upon their arrivals in the cities.

The measures were announced as imported cases of the coronavirus have increased and become more worrying as homegrown infections drop.

The KCDC said more than one-third of Korea’s infections over the past two weeks have been brought from a foreign country.

The KCDC said Thursday morning that 89 new cases of the coronavirus were counted in the nation Wednesday, down from 101 new cases Tuesday. Of Wednesday’s 89 new cases, 36 were imported. Among Korea’s 9,976 total infections, 601 cases, or about 6 percent, were imported, mostly from Europe and the Americas.

A total of 169 people died as of Wednesday midnight, up by four from the previous day, while 5,828 patients have been declared fully recovered, up 261 from the day before.

From Wednesday, almost all Korean and non-Korean nationals landing in Korea from overseas have been required to self-isolate in their homes or a government-run isolation facility for 14 days, the incubation period of the coronavirus.

Exceptions to the isolation order have been made for a few specific visa categories, such as diplomats and those who receive special waivers from the Korean government in advance, in case they intend to stay in Korea for a short term, or 90 days or less. There are no self-quarantine exceptions for foreigners staying in the country long term.

Under domestic law, anyone who violates the government’s self-quarantine rule can face up to a year in prison or be charged 3 million won ($2,440) in fines. Local authorities recently raised the fine to 5 million won effective Sunday.

The Ministry of Justice said Thursday that at least eight foreigners were prohibited from entering Korea upon arriving at a local airport because they refused to self-quarantine for 14 days. The ministry did not explain their reasons, but a ministry spokesperson said everyone had been told from their departure points that they would have to undergo two weeks of isolation once they landed in Korea.

Among Korea's latest infections, health officials said at least one person among 309 people who were airlifted from Milan, Italy, to the Incheon International Airport Wednesday afternoon tested positive for the coronavirus.

Seoul’s most recent cluster at the Manmin Central Church in Guro District, western Seoul, grew to 37 Thursday. At least 22 infections have been traced to The Catholic University of Korea Uijeongbu St. Mary’s Hospital in Uijeongbu, Gyeonggi, just north of Seoul, up from 13 on Wednesday.

The clusters at three different Daegu hospitals also continue to rise, with 95 cases connected to the Daesil Nursing Hospital, 123 to Hansarang Care Hospital and 147 to Second Miju Hospital.