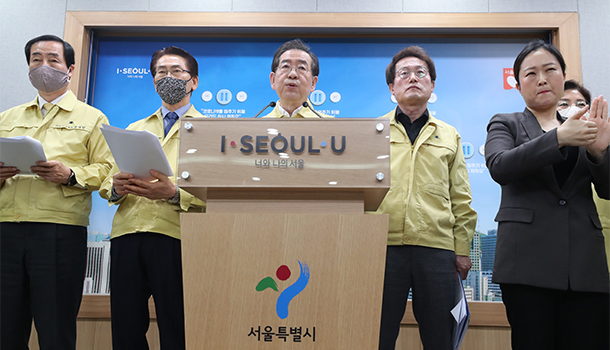 Starting tomorrow, all Koreans and foreigners arriving from overseas who intend to stay in Seoul will be required to be tested for the coronavirus.

Seoul Mayor Park Won-soon announced at a press conference at Seoul City Hall Thursday morning that anyone who plans to stay in the capital after arriving from a foreign country will have to be tested at the airport, their local community health center or a makeshift testing center that will be set up at the Seoul Sports Complex in Songpa District, southern Seoul.

The city is strongly recommending incoming travelers get tested before they go to their homes.

Rides on limousine buses will be offered at Incheon International Airport to bring arriving passengers to the testing centers.

Seoul’s new guidelines are more rigorous than the central government’s, which allow Koreans and foreigners arriving from a foreign country other than Europe to forgo a virus test unless they come down with symptoms.

Park explained Thursday that the city has decided to test all incoming people because a large number of the people arriving from abroad were coming to Seoul.

The KCDC announced Thursday morning that 89 new cases of the coronavirus were counted in the nation Wednesday, down from 101 new cases tallied Tuesday.

A total of 169 people have died as of Wednesday midnight, up by four from the previous day, while 5,828 patients have been declared fully recovered, up 261 from the day before.

The majority of Korea’s imported cases are from Europe and the Americas.