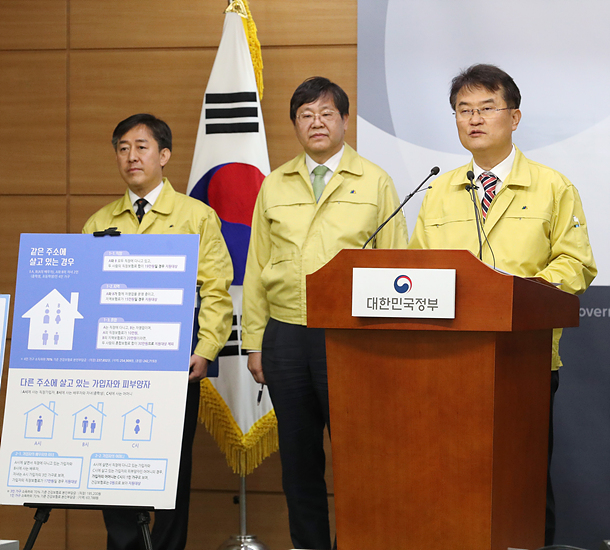 Government officials explain the details of the emergency relief grant on Friday at the Sejong government complex.

The government says the emergency relief grant that will be given to households whose monthly income falls in the bottom 70 percent will be determined based on the health insurance payment made in March.

The government, however, said it will not include those with massive wealth even if they meet the insurance criteria.

It said the details to the massive wealth limit will be announced at a later date.

“For small business owners and the self-employed whose incomes have shrunk significantly recently but wasn’t reflected in [last month’s] insurance payment, the government plans to come up with various reinforced measures so that their income status when applying [for the government funds] can be taken into account in the local governments’ final decisions,” said Yoon Jong-in, vice minister of the interior and safety.

The government said it has decided to use the health insurance payment in determining families that will be eligible for the government grants because it is data that is available at hand.

“On average it takes two months in determining the households that will be eligible when using the initially considered investigation system in assessing incomes,” said Yang Sung-il, head of the health and welfare policy bureau at the Ministry of Health and Welfare. “However, the national health insurance payment is the most recent data [that can be used immediately].”

President Moon Jae-in on Monday said the government will grant cash-equivalent grants to 70 percent of households in the country or roughly 14 million families to cope with the economic impact of the coronavirus pandemic.

President Moon said the government will work to see that the grant be distributed to the 70 percent of households by mid-May.

The government said the funding on the relief grant will be made through a second supplementary budget.

The government said the 7.1 trillion won will be created through a second supplementary budget that it plans to get approved by the National Assembly after the April 15 general elections.

However, the government on Monday did not give details as to what standard will be applied in determining households that will be eligible for the grant other than that it will be the lower 70 percent, which generated confusion and criticism that the government was rushing the grant without proper evaluation.

There has also been speculation that the government will be excluding those that paid comprehensive real estate taxes as they are considered wealthy.

According to the Land Ministry, those that had to pay the comprehensive tax on a single apartment whose assessed value exceeded 900 million won last year amounted to 218,124 households. Of that total 93 percent are in Seoul or 203,174. In the richest neighborhood of Gangnam, southern Seoul, 69,441 households were billed with the comprehensive real estate tax.