Kim Tae-hoon finally takes the mound as a starter

Kim Tae-hoon finally takes the mound as a starter 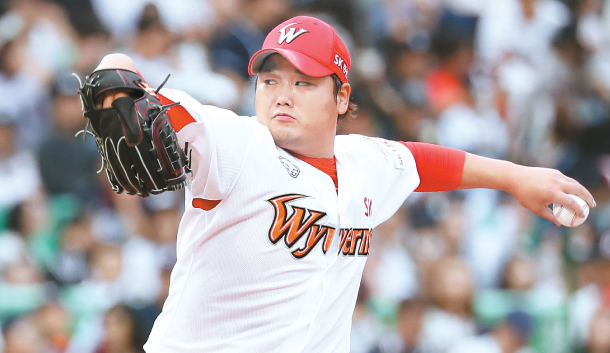 The 2020 KBO regular season may be postponed indefinitely, but that hasn’t stopped the SK Wyverns’ left-handed pitcher Kim Tae-hoon from preparing harder than he ever has before.

Having made his KBO debut in 2010 with the Wyverns, Kim finally earned the opportunity to start the season as a starting pitcher this year, for the first time in his pro career. After the Wyverns lost its ace pitcher Kim Kwang-hyun after the 2019 season when he joined the St. Louis Cardinals, the club chose Kim Tae-hoon as their fifth pitcher in the starting rotation.

Throughout Kim’s career, he’s been in the bullpen or was assigned as a temporary starter to fulfill the absence of injured players. But after proving himself by showing great pace throughout spring training, Kim finally earned his shot.

During intrasquad games, he’s been showing great pace. In the Wyverns’ games on March 20 and on the 26, he tossed three and five scoreless innings each.

Q. Is this your first time preparing for the season as a starting pitcher?

A. Back in 2012, I heard [former] manager Lee Man-soo say that he’ll use me as a starter so I prepared for [the season] as a starter. But I wasn’t able to get on the mound as a starter that year. Since I’ve fulfilled the role of [temporary] starter, there weren’t too many difficulties in preparing for the start. But I am being very careful with my arm, which I had a surgery on at the end of last season, so I don’t feel pain again.

What did you focus on the most during spring training?

My third type of pitch. Since I’ve been throwing mostly sliders and fastballs, I worked on having better control of two-seam fastballs and changeups. I did throw them, but I didn’t use those types of pitches in actual games. In the bullpen, I was O.K. with just fastballs and sliders, but if I go out on the mound as a starter, I would need another type of pitch. I’m going to throw them in exhibition games, before the season opener, and see how the batters react to them. And then, I’ll decide [on which type of breaking ball to use].

Looks like you’ve gotten bigger. Did you gain weight?

Fans have been saying that I’ve gained weight but I actually lost some weight. During the winter when we were doing our personal training, I did a lot of weight training, and that led to my body to get bigger. I weigh about 90 kilograms [198 pounds]. I normally don’t do a lot of weight training, but under training coach Lee Ji-poong, I’ve worked out the most ahead of any season throughout my career. I believe that effect will show during the season.

In your preparation for the season as a starter, did you get advice from other players?

Since the routines of starting pitchers and bullpen pitchers are different, I ask [Moon] Seung-won about his routines a lot. As the starting pitchers throw in the rotation of every four to five days, I asked for some advice about what are some things I should do during that time after the game.

I think it’s important for me to find my routine before the season starts. Since I can’t just do what Seung-won does, I’m on my own path of finding a routine.

You’ve become one of the Wyverns’ starting players and been given a role to prepare for ahead of the season. How do you feel about that?

It’s a lot better than preparing for the season without knowing my role at all because it allows me to be set in the right direction in terms of training. It’s comfortable. Since this will be my first year playing as a starter and I underwent elbow surgery, I think the team is planning on managing the number of innings [just like Kim Kwang-hyun back in 2018]. But if I’m not in pain, I don’t want to miss the rotation and play full time.