‘Digital undertakers’ are busier than ever

‘Digital undertakers’ are busier than ever 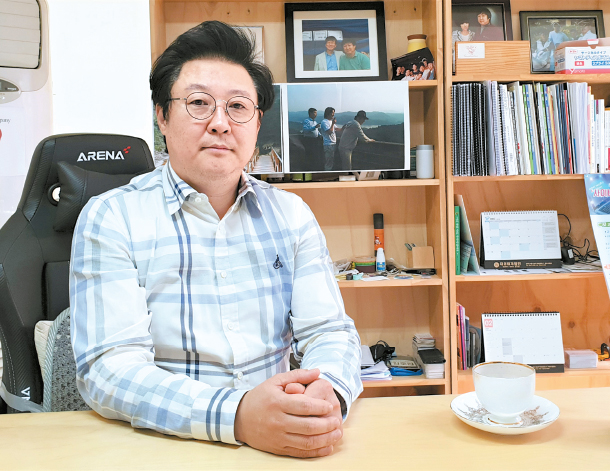 “Digital undertakers,” who erase individuals’ online history, are gaining renewed attention after the “Nth room” scandal broke, involving illegal pornography and violent sex crimes which were distributed through a series of encrypted chat rooms on the Telegram instant messaging app.

The JoongAng Ilbo met with Kim Ho-jin, head of Santa Cruise Company, and Korea’s first digital undertaker, on Tuesday at his office in Gangnam District, southern Seoul, to hear his thoughts on the Nth room scandal.

Kim began his work erasing the online traces of individuals in 2008. He became interested in the digital reputation management business after seeing a child model suffer from malicious comments, but he has also been contacted by the perpetrators of the crimes as well as the victims.

Q. Have you had any requests from users of the Nth room?

A. Forty-five participants in the Nth room have contacted me over the past 10 days since March 21. They say, “I don’t have a lot of money, so please erase my record,” or “I’m having a hard time with my job and family.” But it’s technically impossible to delete Telegram records. I was asked to delete their personal information that netizens publicized, but having a daughter myself, I refused all requests related to the Nth room. To be honest, I was a bit hesitant because the company has not been doing well recently due to the economic downturn, but I didn’t want to ruin my 12-year career.

Did you get any requests from the victims?

Last month I got a KakaoTalk message saying, “Save me.” Then another message, “I can’t live because of my Twitter records.” But it did not lead to an actual case because I didn’t hear back from the person after that.

What kind of requests do you usually get?

Over the past year, we had 2,111 inquiries from individuals, 1,600 from teenagers, 892 from celebrities and 690 from companies, but only 5 percent of these led to actual cases. In the case of ordinary people and teenagers, they often ask to delete their K-pop fandom activities or pornographic videos being circulated by their former partners. Celebrities and companies mostly ask to erase negative posts related to them for reputation management purposes. Overall, 52.5 percent of the requests were related to deleting negative postings, and 25.3 percent requested to delete leaked photos and videos.

How do you delete them?

There is a common misconception that a digital undertaker deletes posts through illegal hacking, which is not true. First, we use our big data program to collect the targeted file that is spread across multiple sites. Because each site has different terms and conditions of use and handling of personal information, we have to request to delete the files accordingly and inform of sites of which laws and conditions are violated. Ninety-percent of the files will be deleted within a day if it’s on domestic servers or a couple of days if on overseas servers.

Isn’t it hard to delete files on foreign platforms?

How much is the service?

We receive a monthly commission fee of 300,000 won [$243] to 2 million won depending on the case. Two million won is for cases related to illegal pornography that is being widely circulated. Teenagers do not have to pay. The commission fee for corporate companies is 10 million won to 60 million won per month due to the wide range of files to be deleted. These are mainly labor costs. One day and two night shifts are assigned per case as more posts are circulated at night.

What if the deleted posts spread again?

We set a monitoring period. Usually, the contract lasts for three months to one year. There is nothing we can do if someone has a capture or an original copy. If it comes up again, we just have to keep on erasing. Even if the contract is over, we ask for 20 percent of the monthly commission fee if it’s six to 12 months after the contract was signed.

Why don’t you charge teenagers?

They call crying on their phones after being unable to speak to their parents or staff at their schools. How can I possibly ask these kids for money who might only get around 30,000 won to 50,000 won in monthly allowance? Instead, I tell them to fill 20 hours of community service. I asked the Ministry of Education, the Ministry of Health and Welfare or the Ministry of Gender Equality and Family, “Can you support these kids?” But the answer was, “We have never paid for such things, so we can’t.”

Has there been any change in the industry in the past 12 years?

The annual sales are now 500 million won, which is less than what we made in previous years. This is because the number of similar companies has increased. In the past, people thought digital records could not be removed. But now, there is a perception that the past should not be left unattended. It’s not the best job to earn a lot of money, but the amount of digital trash will only continue to increase, so we have high hopes for this industry in the long term.

How has online crime evolved so far?

Do people leave a lot of digital tracks?

You may think, “No way, is my information worth it?” But without knowing, you leave traces of your personal information all day. We are living in a time when anyone can figure out your credit rating, student loan balance and even the size of your house. Anyone can be a victim. Among the clients affected were even prosecutors and police officers.

Are there ever any fraudulent digital undertakers?