Blurring the lines between writing and art: A new exhibition features calligraphy in its many forms

Blurring the lines between writing and art: A new exhibition features calligraphy in its many forms 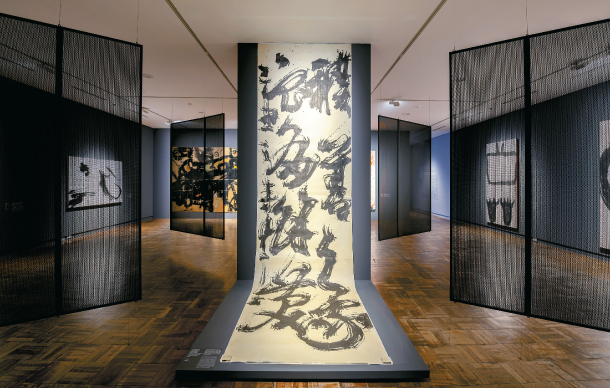 Modern interpretations of calligraphy as a form of art at the special exhibition. [NATIONAL MUSEUM OF MODERN AND CONTEMPORARY ART]

In ancient East Asia, both writers and painters used the same utensil - a paintbrush. And this shared practice led to the lines between what is considered art and calligraphy in Korea becoming blurred.

“Calligraphy was once the core of national art exhibitions in Korea from 1949, after the country gained independence, and into 1981,” said Bae Won-jung, curator of the special exhibition “The Modern and Contemporary Korean Writing” at the National Museum of Modern and Contemporary Art in Deoksu Palace, central Seoul. “But after that, it was no longer considered a work of art.”

However, calligraphy is making a comeback thanks to artists such as Hwang Suk-bong and Oh Soo-hwan who are experimenting with calligraphy brush strokes and incorporating the technique into their work.

The special exhibition will shed light on the trends and highlights of Korea’s history in experimenting with calligraphy as a form of art.

“This is the first time that the museum is hosting an exhibition on calligraphy since our opening in 1969,” Bae said.

The special exhibition first opened online due to the closure of the museum from Feb. 24 until April 19 in light of the coronavirus outbreak. The museum on March 30 streamed a 1.5-hour tour through the exhibition with curator Bae.

Showcasing over 300 pieces of art based on calligraphy, including writing, paintings inspired by calligraphy and sculptures, the exhibition is open through July.

The exhibition is divided into four different sections, to tell the story of how calligraphy was once at the core of artistic expression in Korea; to showcase the representative works of first-generation calligraphers in Korea; to explore how modern artists have incorporated calligraphy into their work; and concludes with examples of calligraphy used in TV programs and business. 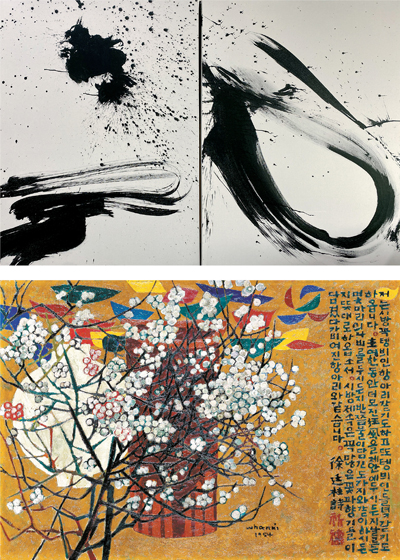 One of the first works that visitors are met with is a painting of Kim Whanki by Kim Yong-jun in 1947.

“A Young Old Man, Kim Whanki, Sitting in Lotus Position” shows a portrait of Kim Whanki (1913-1974), the pioneering Korean abstract artist, with calligraphy written vertically on the right side of the portrait.

“The writing is the title of the piece, and is very much part of the painting, as the characters are written in a way to emphasize visual aspects of calligraphy,” Bae said. “Let your eyes follow the lines that the artist uses to draw and write, using the same type of paintbrush. There is really no way to tell where the drawing ends and when the writing begins.”

Deeper in the exhibition room are large-scale works that show how Korean artists continued to experiment with calligraphy.

Lee Ung-no’s “I Ching 64 Hexagrams Sequence” shows 64 Chinese characters painted as if each character is a human being in action. Again, the boundary between writing and art is blurred.

A number of works by Nam Kwan, also one of Korea’s pioneers in abstract painting, are also on exhibition. His work, “Winter Landscape,” painted in 1972, is an interesting mix of influences between the French art movement of informel and the traditions of Korean calligraphy. The work uses Chinese characters and experiments with decollage, a technique that it is created by cutting, tearing or otherwise removing pieces of an original image, and matiere, a technique that emphasizes texture.

The second part of the exhibition showcases works by 12 artists, considered the first generation of calligraphers by the museum. They include Song Seong-yong (1913-1999), the last scholarly calligrapher of 20th century Korea, Yoo Hee-kang (1911-1976), whose right-side paralysis did not stop him from producing calligraphy using his left hand later in his life, and Lee Cheol-gyeong (1914-1989), one of the few recognized female calligraphers in Korea who is known for promoting the use of palace-style calligraphy that was used by court maidens and noble ladies, according to the museum.

The third section of the exhibition showcases work completed in more recent years by artists, such as Hwang Suk-bong.

“Hwang’s work ‘Aboard Ship 1, 2’ shows the power and energy of brushstrokes in calligraphy and what they look like when expressed as a form of art,” Bae said. “The piece is inspired by the Chinese character, ‘qi,’ that means energy.”

Some other more modern works that incorporate calligraphy include Oh Soo-hwan’s “Variation,” a work of oil on canvas in 2008.

“It is a form of abstract art because the brushstrokes remind you of calligraphy, but they are not expressed with any certain sense of order and organization that is a characteristic of traditional calligraphy,” Bae said.

The last section of the exhibition features examples of calligraphy that can be spotted in common brand names like the letter “Yeol” in Ottogi’s Yeol Ramen, or in the names of restaurants like “Kyochon Chicken,” or in drama series including “Misaeng: The Incomplete” on tvN in 2014.

Maybe most recognizable is a work by artist Shin Young-bok (1941-2016) that features the name “Cheoeum cheoreom,” a popular soju brand produced by Lotte in Korea.