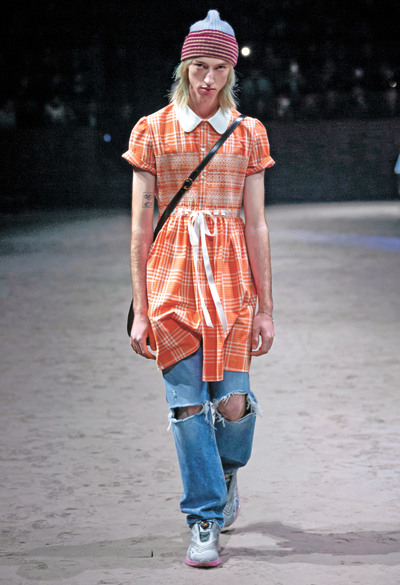 Issues involving transgender individuals have recently made headlines on home soil with two striking stories: Byun Hee-soo, a former noncommissioned officer in the army, was forcibly discharged from the military in February after undergoing male-to-female reassignment surgery while on a break last fall. The staff sergeant reportedly wanted to continue serving as a female soldier. A few weeks later, a transgender woman secured a spot in the law department at Sookmyung Women’s University, but she ended up withdrawing from the school due to fierce opposition from some students.

These two stories give us a clear picture of how transgender individuals are perceived in Korean society, where clear anti-discrimination laws and regulations are lacking.

According to the Korea Institute for Health and Social Affairs, the number of people who identify as transgender in Korea is estimated to be around 250,000. Still, many members of the LGBTQ community feel shut out from mainstream society and are often forgotten.

1. Drag performers are the protagonists in the play “The Legend of Georgia McBride.” 2. Pink is no longer a color only for women. The members of K-pop boy band BTS and singer Halsey wear pink outfits in the music video for “Boy with Luv,” released in 2019. 3. Jeffree Star was the fifth highest-paid YouTube star last year, according to Forbes magazine. He runs his own beauty YouTube channel. 4. JTBC drama series “Itaewon Class” features a transgender character named Ma Hyeon-yi played by Lee Joo-young. [SHOWNOTE, BTS OFFICIAL WEBPAGE, SCREEN CAPTURE, JTBC]

Outside of Korea, there is a growing acceptance for transgender individuals and people who identify outside of the gender binary.

Last year, the Merriam-Webster dictionary selected “they” as the word of the year.

Apart from the word’s original meanings, the dictionary highlighted another meaning of the word: “a single person whose gender identity is non-binary.”

After the new definition was added, the dictionary said it saw a whopping 313 percent increase in the number of searches of the word compared to a year ago.

Some states, including Hawaii in the United States, added the option of “other” along with male and female on identification cards. Some states do not require people to fill in their gender.

Facebook offers 59 gender options for residents in the United States, including bigender and agender.

Slowly but steadily, people who identify outside of the gender binary are becoming more prominent in Korea, too.

In the JTBC drama series “Itaewon Class,” one of the lead characters is transgender. The drama series is based on a web comic series of the same title.

Pengsoo, a popular penguin character, publicly declared that it is neither a man nor a woman.

Another popular celebrity, Yang Joon-il, is gaining popularity for having unusual characteristics for a Korean man in his 50s. The singer is known for breaking gender stereotypes and knows how to mix and match outfits. He is eloquent, sophisticated and not pretentious at all.

Traditional gender roles are especially being disrupted in the beauty and fashion industries.

YouTube channels specializing in beauty products used to be considered a realm for female YouTubers, but not anymore.

He initially started his career as a musician but later created a YouTube channel dedicated to beauty products.

Now Star has 17.5 million subscribers and his own cosmetics brand through which he makes 20 billion won ($15.5 million) in annual sales. The beauty mogul’s videos now move and shape the beauty industry.

Gucci has carried out a campaign to fight for gender equality since 2013. The high-end fashion brand went a step further last year when it put androgyny at the forefront of its 2019 F/W collection.

Centered around the theme of persona, a theatrical mask worn by actors during ancient Greece, invitations to the show featured the head mask of Hermaphroditus from Greek mythology. Hermaphroditus has long been considered a symbol of androgyny.

Gucci saw gender as one of the masks that people wear.

Additionally, pink is no longer seen as a color for women in the world of fashion. Pink suits were frequently sported by many male celebrities last year, including K-pop boy band superstar BTS, whose members were all clad in pink when the band released “Map of the Soul: Persona” last year. The boys also rocked rosy suits in the music video for their 2019 hit song “Boy With Luv.”

Additionally, actors Ju Ji-hun, Lee Dong-wook and K-pop boy band Seventeen were all seen decked out in pink from the top to toe at various events last year.

The newly-launched United Future Party chose its signature color to be pink, calling it “happy pink.”

In another sign of the times, drag artists are emerging as new cultural icons. They wear extreme makeup, extravagant outfits and act out gender stereotypes in exaggerated ways.

In Korea, drag culture is still considered a subculture relegated to central Seoul’s Itaewon neighborhood, but it has become a mainstream in the United States over the past decade.

Now in its 11th season, the show has won a total of nine Emmy awards.

RuPaul Andre Charles, the host of the show, was included on the Time 100 list of the world’s most influential figures in 2017. He also appears in the Netflix show “AJ and the Queen,” in which he plays the role of a drag queen named Robert.

Contestants who have appeared on “RuPaul’s Drag Race” visited Seoul in February to present a drag show.

Among the competitors who have appeared on the show, Korean-American contender Kim Chi recently became the first drag performer to appear in a commercial aired during the Super Bowl, which is seen by more than 100 million people in the United States alone. He made it to the top 3 during the eighth season of the show.

The drag queen was the first Korean featured in an advertisement for the Super Bowl since Korean singer-rapper Psy, best known for his hit song “Gangnam Style” (2012), did so in 2013.

This year, about 50 or so advertisements ran during the Super Bowl, and nine of them included members of the LGBTQ community.

Drag performers are gradually making their way into mainstream culture in Korea, too.

With more than 100,000 followers on Instagram, Kim and his team Neon Milk have done photo shoots with fashion brands such as Converse and H&M. They have also appeared in music videos from Korean girl groups like Brown Eyed Girls and Mamamoo.

A drag queen concept is sometimes adopted by some as a strategy to earn publicity.

Most recently, Han Yi-jae, one of the participants on the popular singing audition show “Mr. Trot,” performed in a costume presenting him as half man and half woman.

The TV show features young participants singing trot music, a genre that has long been widely enjoyed by older people.

Han failed to make it to the final round, but the singer instantly earned 50,000 subscribers to his YouTube channel after the performance.

Throughout history, gender roles have long been broken down on stage.

Before modern times, women were not allowed to perform on stage. It was common for male actors to play female roles. They were present in Greek tragedies, Shakespeare plays, Beijing operas and Kabuki and Noh theater in Japan.

Musical “Hedwig and the Angry Inch,” featuring a transgender protagonist, remains one of the most popular musicals among Koreans. It has been staged in the country for 15 years.

Other musicals with LGBTQ characters, such as “Fun Home” and “Everybody’s Talking about Jamie,” will be presented for local musical fans within the year.

Before modern times, it was inevitable for male actors to have to play female roles, but now drag queens are used as metaphors to defy the gender binary.

Early musicals like “Hedwig,” “La Cage aux Folles” and “Priscilla, Queen of the Desert” elaborate on spotlighting the difficulties of transgender life, but recent works such as “The Legend of Georgia McBride” and “Kinky Boots” deal with changing perceptions of those who do not conform to the boundaries of being male or female.

A common thread found in many of these musicals is that one can achieve happiness and success in life only when they discover their true self by transcending gender stereotypes.

Diversity and inclusion are hot topics in politics and economy throughout the world, and more discussions and opportunities to learn more about cultural diversity are needed, according to some experts.

Cho Ji-seon, a doctor at the Institute of Human Behavior at Yonsei University, said, “Asian societies, including Korea, put an emphasis on authority, order and experience from the past. So when an exotic group shows up in their ordinary lives, they react to it with a feeling of discomfort.

“But with more progressive people taking on art, fashion and beauty, we are at a phase of looking at [people pushing the boundaries of gender roles] as trendy and interesting. If the positive sides of minorities are repeatedly exposed through pop culture, and when enough discussions are had about them, the [LGBTQ community] will be embraced more than they are now,” she added.