President gets bankers together and tells them to lend

President gets bankers together and tells them to lend 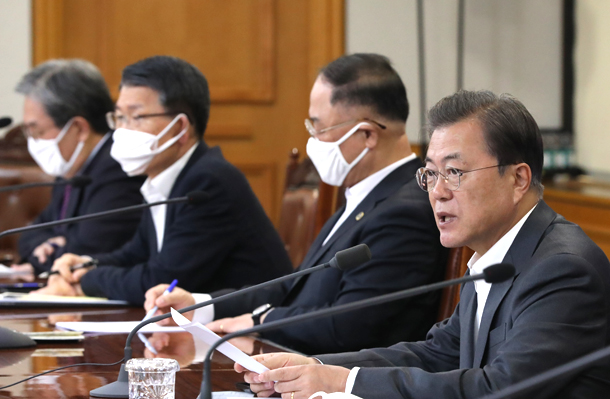 President Moon Jae-in, far right, speaks at a meeting attended by chiefs of major financial institutions in Korea at the Korea Federation of Banks in Jung District, central Seoul, on Monday. [YONHAP]

President Moon Jae-in on Monday urged lenders to speed up the processing of loan applications to help small businesses rebound from the coronavirus crisis.

Moon convened an economic council meeting Monday, the first time he brought together the chiefs of major financial organizations in Korea including commercial banks, state banks and public institutions, along with financial regulators.

Moon was originally scheduled to preside over a weekly meeting of top aides at the Blue House but canceled it to meet the bankers.
Moon said the government will not hold institutions responsible for making mistakes as long as they are not intentional.

“In the process of actively providing loans, there could be mistakes made unintentionally,” Moon said at the meeting.

“There won’t be a situation where the government or the financial authorities ask whose fault it was. I can promise you that clearly.”

Moon compared the role of banks in the current crisis to medics at a quarantine site.

“Small business owners that are directly hit by Covid-19 are having a lot of trouble getting their hands on loans. I request that such bottlenecks be addressed with special care.”

Moon thanked the financial institutions for coming up with “pre-emptive measures” to avoid a possible credit crunch.

“The 100 trillion won [$81 billion] emergency aid package would not have been possible without active support from the financial industry,” he said. “Unlike previous economic crises, the financial measures were pre-emptive and exceeded market expectations in size as well.”

Earlier in the day, labor unions in the finance industry agreed with financial authorities to allow workers to work more than 52 hours a week on the job for quicker processing of emergency aid programs.

It is usually mandatory for big companies in Korea to follow a 52-hour workweek.

For public financial institutions that can’t allow overtime to workers due to limited budgets, financial authorities said they will consider delaying the implementation of budget guidance for this year so the institutions can freely pay extra money for overtime.