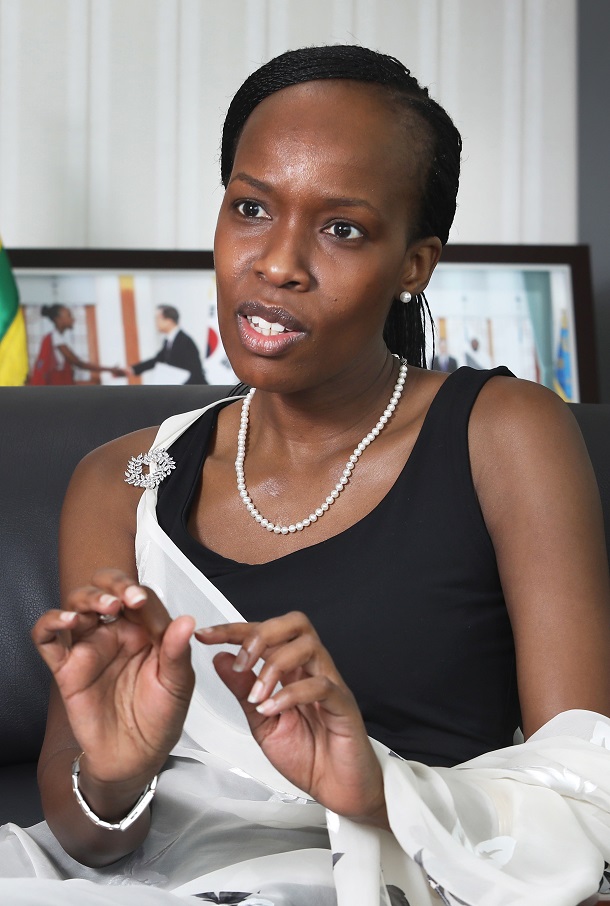 Ambassador of Rwanda to Korea, Dalila Yasmin Amri Sued, speaks with the Korea JoongAng Daily at the embassy located in central Seoul on April 1. [PARK SANG-MOON]

The Rwandan community in Korea will light candles today to remember the loved ones they lost to genocide 26 years ago, and the poignancy of the commemoration will not be diminished by the coronavirus pandemic, according to members of the community.

“For every Rwandan, the Genocide against the Tutsi is a very personal and critical moment in our country’s history,” said Dalila Yasmin Amri Sued, ambassador of Rwanda to Korea. “A million people were killed in a country of close to 7 million people. So you can understand that the event affected pretty much everyone.”

It is not an easy time to be alone, but social distancing will be practiced in these unusual circumstances, the ambassador said.

“The members of the staff at the embassy and the members of the Rwandan community here in Korea will gather online, in a video call, to pull together in this challenging time,” Amri Sued said. “The events held in Rwanda will be streamed online as well, for communities worldwide to participate in virtually.”

On April 7 every year, Rwandans mark the Genocide against the Tutsi in Rwanda in 1994 that tore the African nation apart and took around a million lives in the span of three months.

The week-long commemoration begins with the lighting of the flame of hope at the Kigali Genocide Memorial Center, where thousands of Rwandans killed in the genocide are buried.

“The flame is lit for 100 days, the duration of the genocide, and can be seen from many parts of the city,” Amri Sued said. “In the afternoon we will hold discussions for everyone to take part in, to talk about how we can ‘remember’ by honoring the memory of the over one million victims, ‘unite’ through the strength and dignity of our nation, and ‘renew’ our determination to build a prosperous future for generations to come. This year, the discussions will be held over the night and streamed online so that Rwandans outside of the country in different time zones can join the conversations.”

In light of the Covid-19 outbreak, that Rwanda is not exempt from, the commemoration will be minimized in terms of people attending in person.

The virus has infected 104 in Rwanda as of the end of last week, with four recovered cases, according to the Rwandan Ministry of Health.
According to the Rwandan Embassy in Seoul, the country saw its first case of infection on March 14 and the government declared a temporary lockdown to contain the spread of the virus.

It has been an unusual first six months for Ambassador Amri Sued, who arrived in Korea last October. The outbreak first began in Korea in late January. If there is a silver lining to all of this, Ambassador Amri Sued said, she has seen an interesting side of Korea in a relatively short span of time.

“Seeing people in a bad time tells a lot about them,” Amri Sued said. “The Koreans that I have seen during this time have told me that they are extremely responsible for each other — you can tell by the way they have adhered to wearing masks in public spaces — and their resiliency. Two months of making decisions every day to practice social distancing is not easy. But people are still pulling through.”

Ambassador Amri Sued recently sat down with the Korea JoongAng Daily to share stories of remembrance, recalling the past atrocities in her country as well as her past six months in Korea, and how she and her staff at the embassy in Seoul intend to take these stories forward for both the people of Rwanda and Korea.

Q. Tell us about the significance of Kwibuka for Rwandan communities worldwide.

A. The commemoration period, commonly referred to as Kwibuka, the Kinyarwanda [an official language of Rwanda] word for remembrance, will be an opportune moment to pay homage to the victims as well as reflect on Rwanda’s transformational journey. This year’s National Commemoration, under the theme of “Remember-Unite-Renew” will focus on the legacy of strength, resilience and unity. The new generation is being called upon to sustain the strides Rwanda has been able to make over the past quarter of a century and carry forward the vision for Rwanda’s transformation.

We are going to have an official ceremony in Rwanda, though it will be minimized to practice social distancing. We will begin with lighting the flame of hope at the Kigali Genocide Memorial Center, which is a location designated to remember the genocide. We will light the candle there that burns for 100 days, the duration of the Genocide against the Tutsi, and can be seen from many parts of the city.

How will the Rwandans in Korea commemorate?

In Rwanda, we usually gather at a local government level to hold these discussions that everyone can participate in. […] This year, the discussions will be held during the night and streamed online so that Rwandans outside of the country in different time zones can join the conversation.

For every Rwandan, the genocide is a very personal and critical moment in our country’s history. […] There is a before and after [the genocide] for every Rwandan. So you can imagine it can be a difficult time for people to be alone.

What is the message Rwandans are sending out to the rest of the world by holding the commemoration every year?

During this genocide, it was not “Hutu” who killed “Tutsi,” but a Hutu extremist group imbibed with an ideology of hate and means of propaganda. Genocide is a carefully built system that is going to instill hate in a group of people over time and no country is safe from it. That horror was stopped by the Rwanda Patriotic Front led by the President H.E. Paul Kagame on July 4.

Twenty-six years on, Rwanda has built itself solidly by choosing the path of justice, unity and development of the country. It is the heritage of Rwanda. This is to say, never again will such genocide happen anywhere in the world.

As we are on the topic of remembrance, how would you wish for Koreans to remember Rwanda by the end of your tenure?

I would love for Koreans to think of Rwanda as a country where innovation is possible and hopefully as a bucket-list country.

Rwanda and Korea have a good relationship on ICT development, and as an example, KT has invested in installing the 4G LTE nationwide network in the country. The Kigali Innovation City is a growing hub in this part of Africa that provides growing opportunities for Korean SMEs. In the city, you can open a company in six hours, and we have one of the youngest populations on the continent. Our market is not just about Rwanda — it is a point of access for the whole continent.

Rwanda is not yet a bucket-list country for Koreans, but there is so much to be discovered in the forests of Rwanda that are home to 30 percent of the world’s gorilla population. You will find wonders you cannot discover in other parts of the world in the pristine natural habitats of the country.