New infections of the coronavirus dropped to 47 Sunday, as Korea succeeds in flattening the curve of its outbreak.

Health officials said Monday it was the lowest day-to-day infection figure since Feb. 20, when 16 cases were announced, mostly traced to a Shincheonji church in Daegu. That was the start of the mushrooming of cases in Korea.

On Saturday, 81 new cases were reported.

Sunday's significant drop came only a day after the government said its goal was for daily new infections in the country to fall below 50 while announcing a two-week extension of its so-called high-intensity social distancing campaign. 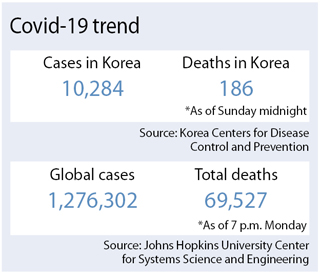 Authorities, however, remained cautious Monday about celebrating the accomplishment, saying fewer people get tested over the weekends compared to the weekdays, which could explain the smaller number who tested positive last Sunday. Officials said more than 10,000 people normally get tested on a given weekday, whereas last Sunday, only 5,571 were tested.

Daily new infections had been hovering around 100 lately, with the majority coming from either sporadic clusters in Korea or imported cases, mostly Koreans who contract the disease while living or studying in a foreign country before coming back home to escape outbreaks overseas.

By Sunday midnight, 186 people had died, up by three from the previous day, while 6,598 had been declared fully recovered, up by 135 from the day before. Of Sunday’s 47 new cases, 16 were imported. Among Korea’s 10,284 total infections, 769 cases, or about 7.5 percent, were imported, mostly from Europe and the Americas.

As local government offices complain about foreigners and Koreans arriving from overseas disobeying two-week self-quarantine orders and lying to epidemiologists, the Central Disaster and Safety Countermeasures Headquarters, which is the central government’s task force fighting the coronavirus, vowed Sunday to crank up surveillance measures and severely punish violators.

As of Saturday, a total of 37,248 people were quarantined in their homes or government-run isolation facilities, 30,000 of whom recently returned from a foreign country, according to data from the task force.

So far, at least 137 people have been busted for disobeying the government’s self-quarantine order, including one British person in Suwon, Gyeonggi; two Polish people in Yongsan District, central Seoul; one French person in Mapo District, western Seoul; and one German in Busan. Some of their cases have been referred to the Ministry of Justice to be considered for deportation.

Starting Sunday, any Korean or foreigner who violates the isolation rule can face up to a year in prison or up to 10 million won ($8,000) in fines under the revised Infectious Disease Control and Prevention Act, which is more severe than the previous maximum fine of 3 million won. For foreigners particularly, health officials vowed to enforce the Immigration Act to deport them from Korea if they violate the self-quarantine order.

The government’s task force said Sunday that more local government offices will team up with the police to randomly ring the doorbells of quarantined people without any notice to check whether they’re at home. The measure is in response to a growing number of people leaving their smartphones at their homes and roaming around.

All quarantined people have to download a self-quarantine app on their smartphones that comes with a GPS function that enables government officials to check whether they remain in their permitted boundaries.

The Ministry of Justice announced Sunday that a Taiwanese woman who arrived in Korea last Thursday and was told she had to self-quarantine at a government-run isolation facility at her own expense, about 100,000 won per day, said she couldn’t pay the fee and so was deported.

From last Wednesday, all Korean and non-Korean nationals landing in Korea from overseas have been required to self-isolate in their homes or a state-run facility for 14 days, with exceptions made for a few specific visa categories arriving for short-term stays, or less than 90 days.

In Pyeongtaek, Gyeonggi, home of the Osan Air Base of the U.S. Air Force, at least 16 infections have been traced to a wine bar run by an American woman in her 40s, who tested positive for the coronavirus last Wednesday shortly after returning from a U.S. trip from Feb. 23 to March 19, according to Pyeongtaek officials. As of Monday morning, 16 out of at least 22 people she was in contact with tested positive, including an American man in his 40s who works at an IT company on the Osan Air Base.