A new chapter or the end of the line?

A new chapter or the end of the line? 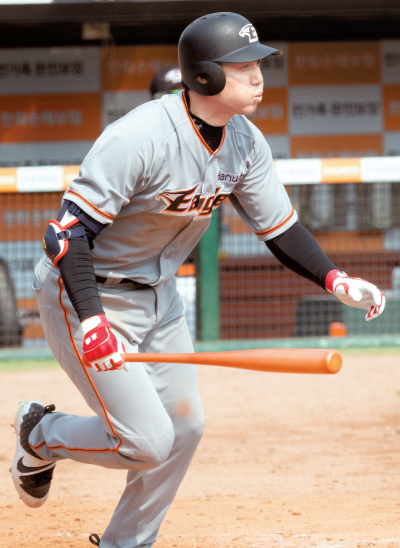 Kim Moon-ho runs to first base after a hit during the Hanwha Eagles intrasquad game at Daejeon Hanbat Baseball Stadium on April 2. [YONHAP]

At age 32, veteran outfielder Kim Moon-ho is ready for a new start in his baseball career, and that will come with a new uniform from the Hanwha Eagles.

When the 2019 season ended, Kim was one of many Lotte Giants players to get released, and he struggled to find a new club for quite some time. It was when he felt like taking a different career path that the call from the Eagles came.

Kim made his KBO debut with the Giants in 2006, and since then, he’s only played for the Busan club. His career high was in 2016, when he finished with a 0.325 batting average with 171 hits and 70 RBIs, but since then, he hasn’t repeated such success. Making matters worse, the Giants already had a strong lineup of outfielders. Due to this in 2019, Kim only appeared in 51 games and finished with a disappointing 0.243 batting average with 25 hits and no home runs.

Throughout his career with the Giants, Kim had a 0.283 batting average with 245 hits and 18 home runs, which wasn’t enough for him to stand out.

But at the Eagles, he did see a transformation. Under manager Han Yong-duk, he started training for first base at spring training and began catching hits from the infield rather than the outfield for the first time.

Kim is rather optimistic about the new position but aware that it could either mark a new chapter in his career or be his last chance.

Q. After playing 14 years with the Giants, you’ve switched clubs. Have you adjusted to the Eagles?

A. I feel like I’ve already become a Hanwha player because everyone made me feel comfortable. It also helped this year because [the Eagles had] a lot of new players from different clubs. I ate meals with them, and by talking a lot, we learned to get along very comfortably. I feel like I’ve been with this team for a long time.

After you got were released by the Giants, did you have anxiety waiting for an offer?

I would say so, because I didn’t get a call from them for a long time. At first, I told myself that regardless of the team I join, I’m just going to work hard. But as the time [where I didn’t get any calls from any teams] went on, my mind emptied. As I kept on training, I was thinking about the second chapter of my life. Thankfully at that time, I got in touch with Hanwha and was very thankful to be able to join their spring training.

You’ve worked hard to become a first baseman. How did you prepare to play in this new position?

Since it’s literally the first time covering first base, I’ve increased the amount of time I spend training and tried my best to focus on the basics. Right now, I’m not at a point to think about positions. I’ve been an outfielder before, so spending less time training in the outfield before the season won’t affect me too much. I think I need to prepare for the season focusing on covering the first base, so I can play properly when I go out to the field in actual games.

The Eagles are having quite the competition for outfield positions so isn’t it a good opportunity for you to cover first base instead?

Yes. As a player, it helps me a lot. If I was aiming for just one spot in the outfield, then it’s uncertain as to what will happen to me in the future. But if I can also cover first base, then it’ll allow me a greater opportunity later. So I’m enjoying it.

First base is also a position where you get a lot of fast grounders from left-handed batters. Are you having any difficulties in covering the first base?

For now, it’s fun. Other fielders would think that covering the first base is easier and is more comfortable, but once you actually do it, it’s not. Instead, there are a lot of dynamic aspects. I’m still adjusting [to the position], so it is true that there are some difficulties. At the beginning of spring training in the United States, I did get hit by baseballs. When you’re in the outfield, there is still time for the hit to land, so I just need to find the right spot and run there. But at first base, [since I’m close to at-bats], a lot of the hits require me to be speedy, so I am having a little difficulty. Also, at first, as I was catching a lot of the hits from shorter distances, I was getting a lot of bruises on my palm. But it’s O.K. I believe that this will lead to good results later.

Do you have plans of your own while wearing the Hanwha Eagles uniform?

I haven’t secured my position as a starter, and since I have to get off to a new start from a new team, I need to start from the beginning. First, I’m going to show everything I can until the season opener and let the coaching staff decide. If I had to set a goal, it would be to show myself playing at Daejeon Hanbat Baseball Stadium in as many games as possible. Overall, I’m not doing badly, but I am a little disappointed about not being able to get my competitive edge on point, because we’re in a situation where we can’t play exhibition games against other teams.

Do you feel like this is your last chance?

This is something I’ve been talking about since I’ve been playing for Lotte. I always played the season thinking that this is my last chance. Since you have to fight through the competition in the world of the pros, it’s the same at Hanwha. I will have to play leaving no regrets, and if it doesn’t work, then it’s right for me to give up. But at the same time, it’s my duty to prepare well so I can grab opportunities when I get them.

Are you excited for the season to start?

I always came to Daejeon for away games and used the dugout by third base, so I think it’ll feel different when I just use the first base dugout [for the home team]. Since the Hanwha fans are just as passionate as the Busan fans, I expect to be loved [by them] if I play well.