[Hye-rim's Pick] Finding common ground in the admiration of words

[Hye-rim's Pick] Finding common ground in the admiration of words 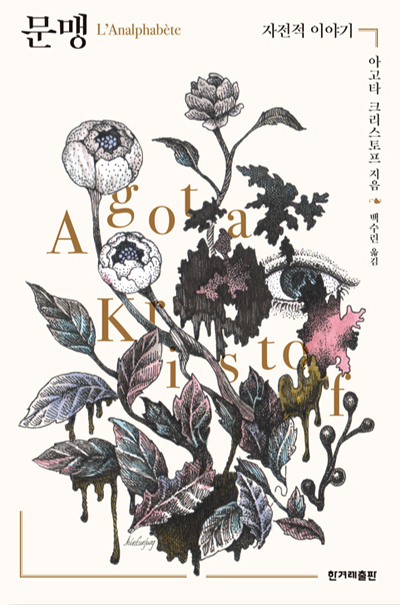 The Korean translation of Agota Kristof’s book “The Illiterate.” It was translated by Baek Su-rin. [HANKYOREH PUBLISHING CO.]

When Agota Kristof’s book “The Illiterate” was given to me as a gift, I hesitated to open it and read the first few pages, which I usually do when I receive a new book, because I thought it was going to be one of those traditional pieces of literature that I’m not a big fan of.

The book stayed on my bookshelf for quite a long time, as I wanted to read it when I was ready to digest the author’s slim memoir. I’m not really sure what finally made me choose it - I was just attracted to it amongst all the other new books on my shelf, somewhat like the times when you gravitate toward one person you don’t really know, without really understanding why.

I would say I wasn’t the one who picked the book out but vice versa.

Anyway, I decided to sit down and read it, first because of the title (I didn’t want to be illiterate) and second, because the book was so slim.

I began with the opinion that it would be a casual read, which I could stop at any time if I became bored, but I stayed in that exact position until the final page. In fact, the book grabbed my full attention from the first sentence.

As someone who loves to read and write, I was amazed by her expression and could quickly notice her admiration for words. I was curious to hear more about her passion for words as soon as I started the book.

Although her passion for words mesmerized me, this book is based on the days when she escaped from her mother country, Hungary, in 1956 at age 21 with her husband and 4-month-old daughter due to the turbulent times of the World War II during the Soviet oppression, and the Hungarian Revolution. Her family escaped to Austria, and from there to Switzerland. Despite having a safe place to live, she writes about the irreparable loss: the loss of her mother tongue as she had to speak French - “an enemy language [that] is killing my mother tongue.”

She writes about her days in boarding school, her experiences in working in factories in Switzerland, and writing her first novel, “The Notebook.” I had a heavy heart reading through, but was amazed by her passion for words throughout the book despite the challenging times. She mentions how she carried two bags with her when she and her family were escaping from Hungary to Austria. In one bag, she had diapers and bottles for her baby, and in the other bag, a dictionary.

As I read the book, I immediately found myself relating to the author.

I was born in Korea, but grew up in Hong Kong. Therefore, I have always felt confusion regarding my identity. Whenever people ask me where my hometown is (a frequent question Koreans ask), I can’t answer straightaway because I’m not so sure. I know I am a Korean citizen, but I had spent my entire childhood in Hong Kong. I felt like an alien living in Hong Kong, but as soon as I came back to Korea as a trainee at JYP Entertainment, I did not feel at home. I speak some Chinese and Cantonese as I went to school in Hong Kong; however, I can’t read or write in Chinese characters. And so, although Kristof and I are presented with completely different circumstances, our contemplation of language is relatable. I found myself nodding all the way through the part where she says she was in a social and cultural desert being a migrant, or when she says she is still a stranger to French although she has spoken the language for over 30 years and has written in it for more than 20 years.

The book not only shares historical and political events, but is a memoir of her passion for words. Kristof’s writing style for this book is simple and precise. During the read, I felt like I was taken back on a journey to 1956, but I could also feel that the spark in her heart still lives to this day. She has proven that nothing can stop you if you have a dream.

“The truth is, I would have written in any language, no matter where I was,” she writes. More than anything, her love for words is to be admired.