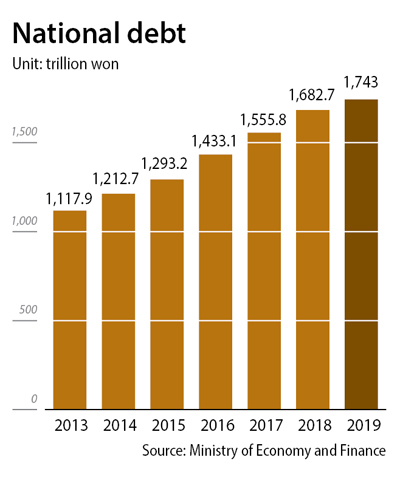 Korea’s national debt hit an all-time high in 2019, despite the year being relatively calm and crisis free, as the tax take fell and bonds had to be issued to cover massive spending.

Snowballing debt remains a major concern. The government has been forced to continue to live beyond its means during the coronavirus crisis and is being pushed further into debt by political parties insisting that the emergency grant program be expended.

According to the Ministry of Economy and Finance on Tuesday, the national debt, which includes the government debt, pension liabilities and state-owned company debt, last year hit 1,743.6 trillion won ($1.436 trillion). That’s 3.6 percent, or 60.2 trillion won, more than the 1,683.4 trillion won of national debt in 2018.

In 2019, bonds outstanding jumped 51.2 trillion from 2018, when the balance was 606 trillion won. Government liabilities overall increased by 60 trillion won.

Last year, the consolidated fiscal balance, which is the difference between the government’s total revenues and spending, was a negative 12 trillion won.

This was largely because taxes collected fell short of the target while spending grew much faster than initially planned.

The situation is becoming critical as tax collection has shrunk while spending has increased significantly in countering the coronavirus outbreak.

In the first two months of this year, revenues totaled 77.8 trillion won, which is a 0.3 percent increase. The government collected 46.8 trillion won in taxes, which is a 4.9 percent decline from the same period a year earlier.

Spending in the first two months of the year totaled 104 trillion won, a 16.5 percent increase on year.

In addition to implementing immediate relief plans, the government is currently discussing the rollout of emergency grants.

While the government is excluding the wealthiest 30 percent, both the ruling Democratic Party and the opposing United Future Party are demanding that every resident receive the emergency funding.

Under the initial proposal made by the government, which limited the program to the 70 percent of the households with the lowest incomes, the budget would have been 9.1 trillion won, with the central government covering 7.1 trillion won through a supplementary budget.

The plan proposed by the political parties would cost the country between 13 and 25 trillion won, which would create a huge burden.