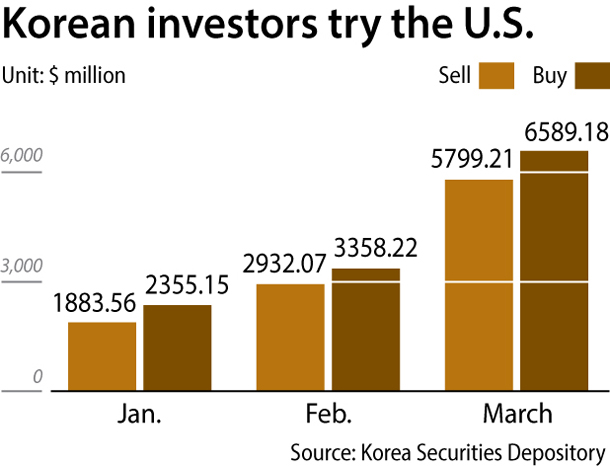 Retail investors in Korea were apparently not satisfied with betting on local stocks as the coronavirus roiled markets, with many trying their luck overseas.

Ninety percent of those transactions were made on U.S. stock markets.

“The economic impact from the coronavirus shook up the entire global market, leading to lower barriers for local investors to get access to large cap stocks in the United States, which used to be quite expensive,” said Kim Il-hyuk, an analyst at KB Securities.

“Buying overseas stocks, which was considered difficult and complicated, tended to get easier lately with various sources of information and sales channels.”

Apple was an unrivaled favorite among Korean investors in March with net purchases of $259 million, followed by Alphabet, the parent of Google, and Tesla - with $80.9 million and $70.4 million respectively.

Apple shares hovered above $300 in January but dipped to as low as $224 on March 23, when the coronavirus infection rate started to accelerate in the United States. In February, Apple wasn’t even listed in the top 50 of Korean retail investors’ picks for companies listed on overseas markets.

Tech companies were also popular in March, with Microsoft coming in fourth followed by Amazon and Boeing.

Gilead Science, a company developing a treatment for Covid-19, was in 16th place with Korean retail investors net buying shares to the tune of $19.8 million.