Choi Eung-sik, head of the labor union of Korean employees for the U.S. Forces Korea (USFK), laments that workers for the American military here have been forced into furlough and are being taken “hostage” in the negotiations between Seoul and Washington for a new defense cost-sharing deal.

Choi told the JoongAng Ilbo in a phone interview Monday that the wages of the Korean workers for the USFK “do not have much impact on the increase in contributions to the defense cost-sharing agreement but have become the scapegoat in the Korea-U.S. negotiation process.” 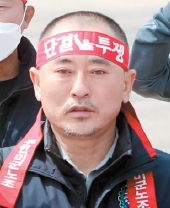 Last Wednesday, over 4,000 Korean employees of the USFK, or around half the Korean personnel working for the American military, were put on furlough because of the delays in reaching a new bilateral Special Measures Agreement (SMA). The previous SMA expired at the end of last year, and the USFK on March 25 sent out a final notice warning that thousands of Korean personnel will face unpaid leave for an indefinite period of time because funds ran out since a new burden-sharing deal has yet to be reached.

Choi, on the same day the notice went out, shaved his head in front of the Blue House in protest of the furlough of Korean workers for the USFK and called for reform of the defense cost-sharing regulations.

He said he sees the current crisis as the worst crack in the Korea-U.S. alliance in 70 years and worries about the impact on the American military’s defense posture in the region. The Korean personnel have even offered to work without pay for the USFK, expressing concerns over security, but they have been prevented from doing so.

While Blue House officials indicated last week that a new SMA was imminent, diplomats on both sides have since said that final negotiations are still ongoing. Washington at one point demanded a fivefold increase in Seoul’s contributions compared to 2019, and Korea has been working to come up with a more equitable deal.

Seoul last month proposed striking a separate agreement to allow for the payment of wages to the Korean personnel of the USFK, but Washington rejected it.

The most the Korean workers for the USFK can do now is lead one-person protests, like Choi has been doing.

Choi said, “If the United States truly wants a steadfast Korea-U.S. alliance and order in Northeast Asia, it has to immediately work toward making sure duties aimed at maintaining fundamental security on the Korea Peninsula are not interrupted.”

Around half of some 9,000 Korean personnel of the USFK considered essential workers are still carrying out duties and being paid by the U.S. government.

Q. Why do you use the term hostage?

A. It is not like we are in this situation because we asked for a hike in wages. Rather, of the three categories covered under the SMA negotiations - wages of the Korean personnel, the cost of construction of military facilities within the USFK and logistics support - the latter two are the ones that are causing an issue currently. The labor cost can be calculated within a fixed ranged, and should not be an issue amid the tug-of-war between Korea and the United States. We are not the ones at fault in the Korea-U.S. negotiations and worry about survival while being caught in the middle.

What is your biggest worry?

A gap in security. For us, taking time off because we cannot get wages is like telling soldiers at the ceasefire line to put down their guns because they are not getting paid. This is the first time we are experiencing something like this since the armistice agreement [ending the 1950-53 Korean War], so we offered to continue to carry out our duties without pay but were told that this is illegal under U.S. labor law and were chased out from our jobs.

Isn’t the worst-case scenario avoided because essential Korean personnel are still working for the USFK?

How does this impact the livelihood of the Korean workers?

The furlough means despair because the employees live off their wages month by month. Some have taken part-time jobs such as chauffeuring.

Do you think that the furloughs are a reflection of the current state of the Korea-U.S. alliance?

There is talk that the Korea-U.S. alliance is not what it used to be, and such a situation occurring for the first time in history since the stationing of the U.S. forces in Korea cannot be seen as merely a coincidence.

Does the union have a plan through collective action?

The United States under the SOFA [Status of Forces Agreement] labor clause doesn’t recognize the laborers’ three basic rights [under Korean law]. If we engage in collective action, the union itself can get disbanded. It is difficult right now to even hold rallies because of the new coronavirus, so the most we can do is hold one-person protests.