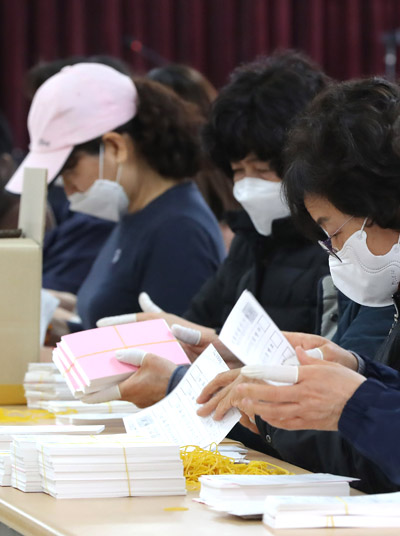 Political parties hurriedly presented ambitious campaign pledges just days before next week’s general elections, but analysis by political experts shows none of them offered specific plans on how to realize their grand projects.

“I would give them all Ds,” said Lee Hyun-chool, a political science professor of Konkuk University and the head of Manifesto Research Team at the Korean Political Science Association, on Monday. “They are the worst [pledges] since the manifesto movement started in 2004 [through which media and civic groups verify parties’ campaign pledges].”

The JoongAng Ilbo and the association have conducted a joint analysis on the major parties’ general election pledges with support from the National Election Commission, which showed the pledges were created hastily without any solid plans to realize them.

“The pledges were made public too late, and they lack specifics,” Lee said. “The parties each announced their 10 key pledges, but they failed to present feasibility studies, expected implementation periods or required budgets. It was meaningless to evaluate them.”

Political parties that field candidates for the general elections are required to register their 10 major pledges to the National Election Commission. It is not compulsory, but the deadline for the registration was 30 days before the election, which fell on March 16. While 33 parties such as the ruling Democratic Party (DP), main opposition United Future Party (UFP), Minsaengdang, formerly known as the Party for People’s Livelihoods, and Justice Party submitted pledges before the deadline, the Citizen Party submitted its pledges on Thursday and the Open Minjoo Party announced its pledges on Monday.

“How can the voters possibly decide which pledges will improve their lives when they were given less than 20 days?” Lee asked. “The parties don’t even have the minimum amount of respect for the voters.”

While the ruling and opposition parties have been engaged in a fierce war on prosecutorial reform and election system change for the past three years since President Moon Jae-in took office, the DP and the UFP did not include political or criminal justice system reform plans in their top 10 pledges.

Lee said the public expectations have grown high over the past years, but the parties are actually regressing. “The time has come to introduce a system that forces the parties to present more specifics on how to implement their pledges when they announce them,” Lee said. “Or the parties must be forced to get opinions from outside institutions such as the Korea Development Institute or the National Assembly Budget Office on how to finance their pledges.”

Of the 41 political parties, the JoongAng Ilbo and the Korean Political Science Association analyzed the top 10 pledges each presented by four political parties that have over five seats in the National Assembly.

The analysis of the pledges of the DP, UFP, Minsaengdang and Justice Party showed that they all lack specific plans on how to realize their grand projects that require large budgets.

Among the 10 pledges presented by the ruling DP is a plan to make Korea one of the four superpowers of technology start-ups.

The DP promised a package of tax exemption measures worth about 150 billion won ($123 million). It promised to increase the amount of tax exemption for stock options at start-ups to 100 million won a year, offer income tax deduction for angel investors and extend the sunset provision of the capital gains tax exemption.

The ruling party also promised that over 1 trillion won of the state budget will be allocated to the fund that invests in start-ups every year.

To make Korea a start-up superpower, a total of about 1.08 trillion won a year is necessary, the DP said. It, however, did not offer specific plans on how to finance the projects. “We will come up with the money by reforming fiscal spending and increasing tax revenues,” the DP said.

The same explanation was used for seven of the nine other pledges.

Although the DP listed dozens of new projects for its 10 pledges, it revealed the required budgets for only five projects, worth 25.1 trillion won.

The opposition parties didn’t fare any better. The main opposition UFP did not disclose any amounts needed to realize its pledges, many of which require budgets, such as corporate and real estate ownership tax cuts, reduction of inheritance and gift tax and full coverage for fertility treatments.

The UFP offered a brief explanation of how it will finance seven of its 10 pledges. “We will utilize the expected increase in tax revenue and the state budget,” it repeatedly said.

“When we calculated the required budgets, about 99 trillion won is necessary to realize the DP’s pledges,” said Lee Young-hwan, professor of taxation at Keimyung University who participated in the analysis. “The UFP’s pledges require about 50 trillion won.”

Other parties also failed to tell voters how they will realize the pledges.

Minsaengdang promised to create 1 million jobs linked to the environmental industry. It promised to invest 100 trillion won for green economy by 2030, but no explanation was offered on who will make the investment or how. The Korean Political Science Association called it a populist election campaign pledge.

The party said it will come up with the resources by increasing the inheritance and gift taxes, as well as property tax and comprehensive real estate holding tax.

Property tax, however, is collected by local governments, and it is impossible to divert the revenue to finance a central government project. Revenue from the comprehensive real estate holding tax is also earmarked for balanced development of the country. “The party doesn’t even know the specific purposes of the taxes and presented preposterous pledges,” the Korean Political Science Association said.