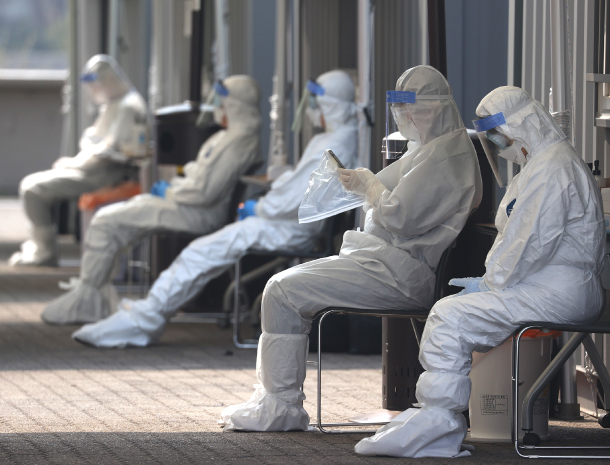 Medical workers at a drive-through coronavirus testing center at the Jamsil Sports Complex in southern Seoul take a rest on Tuesday. [YONHAP]

New infections of the coronavirus remained at 47 Monday for the second day in a row, in what local health officials hailed as “a positive signal” in Korea’s handling of the worldwide pandemic.

The Korea Centers for Disease Control and Prevention (KCDC) announced Tuesday morning that 47 new cases were detected across the country Monday, the same as Sunday’s figure. Korea’s total case load now stands at 10,331.

By Monday midnight, 192 people had died, up by six from the previous day, while 6,694 patients had been declared fully recovered, up by 96 from the day before. 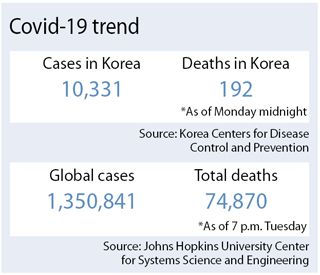 Korean health officials voiced more optimism Tuesday than Monday about flattening the curve of infections, thanking members of the public for participating in the government’s social distancing campaign.

On Monday when the KCDC announced 47 new infections for Sunday, the lowest day-to-day figure since mid-February when a large cluster was discovered at a Shincheonji church in Daegu, authorities were cautious about celebrating the accomplishment, saying fewer people get tested on weekends compared to weekdays, which could explain Sunday’s drop.

Daily new infections had been hovering around 100 lately, with the majority coming from either sporadic clusters in Korea or imported cases, mostly Koreans who contracted the disease while living or studying in a foreign country before coming back home to escape outbreaks overseas or take advantage of state-covered treatment.

On Saturday, 81 new cases were reported, and health officials had said their goal was for daily new infections to fall below 50.

Yoon thanked devoted medical professionals and members of the public for participating in the government’s two-week “high-intensity” social distancing campaign, but in the same breath, warned against premature complacency.

“The number of new infections is continuously declining, but we shouldn’t feel relieved just yet,” said Yoon. “We shouldn’t forget there’s still a risk of the coronavirus spreading.”

Yoon urged everyone in the nation to join the high-intensity social distancing campaign through April 19, which includes various measures such as refraining from leaving one’s house, wearing a face mask outside the house and keeping a distance of at least 2 meters (6.6 feet) from other people.

With no specific vaccine or cure having been developed for the coronavirus, one ray of hope came Tuesday when a team of Korean doctors, many from Yonsei University’s Severance Hospital in western Seoul, announced they had successfully treated two patients by using blood from recovered patients, in what’s known as convalescent plasma therapy.

A research paper published in the latest issue of the Journal of Korean Medical Science on Monday said it was the first known time that the treatment was used in Korea for the new coronavirus.

Many countries around the world have reported using convalescent plasma treatment in helping patients infected with the coronavirus, but rarely have successful cases been announced.

The basic idea behind the therapy is that patients who recover from the coronavirus did so because they developed antibodies in their blood that can fight off the disease. By extracting that blood and inserting it into newly infected patients, the new patients can hopefully improve.

Such was the case in Korea, when a 71-year-old man and a 67-year-old woman were treated with donations from two male donors in their 20s. The man was said to have been healthy previously, while the woman had a history of high blood pressure.

Both saw their conditions improve after the treatment, and the 67-year-old woman was discharged from the hospital on the 24th day of her treatment following a negative test result for the coronavirus. The 71-year-old man has been weaned from a mechanical ventilator.

Upon hearing the successful results, a senior KCDC official announced Tuesday that the Korean government would announce plasma therapy guidelines within the coming days after fielding opinions from medical experts.

On another front, as local government offices complain about overseas returnees disobeying their two-week self-quarantine order and exploiting loopholes in the system, Yoon from the central government’s coronavirus task force announced Tuesday that officials are considering electronic wristbands on quarantined people to better track their whereabouts.

One major hurdle is whether people will view the device as a violation of their human rights, especially because it sounds similar to the ankle bracelets used for criminals like sex offenders.

As of 6 p.m. Monday, a total of 46,566 people were placed under self-isolation mostly in their homes or government-run quarantine facilities, of whom 36,424 recently arrived in Korea from a foreign country.

At least 75 people have been legally charged with violating self-quarantine orders and wandering out of their permitted boundaries, six of whom have been recommended by police for prosecution. Several foreigners are being considered for deportation as well, health officials said.