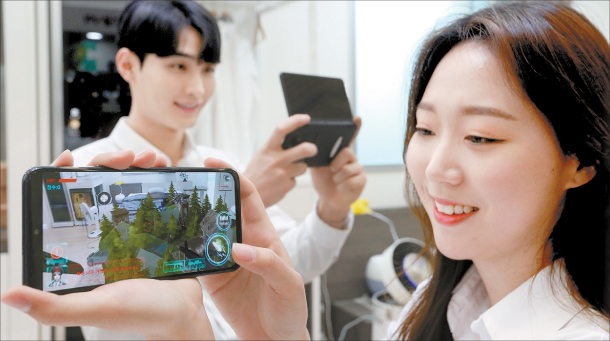 A model plays a mobile game installed with augmented reality provided by LG U+ on Wednesday. [LG U+]

The augmented reality (AR) game lineup will be expanded to more than 20 later this year.

Unlike virtual reality (VR), in which an image is projected through a portable device that covers both eyes, augmented reality combines interactive graphics with real-life images filmed through the user’s camera - a notable example being the popular mobile app Pokemon GO.

The three new games are available through the mobile carrier’s AR content platform, U+AR. They consist of a casual arcade game, a multiplayer battle game and a shooting game. While two of them will be exclusively offered to LG U+ subscribers via app, the arcade game will be made accessible through the company’s mobile website for anyone with a smartphone.

“U+AR is Korea’s first to put together a platform exclusive for AR games,” said Choi Yoon-ho, who is in charge of the mobile carrier’s AR and VR services.

Launched in April 2019, the U+AR service offers more than 1,700 AR videos that run the gamut from K-pop celebrities to at-home workout routines and 3-D characters for kids. But this is the first time games were added to the company’s lineup.

Mobile companies are betting on AR as one of the top fields to drive growth in their 5G networks. The technology requires low-latency connection to create a graphical interface in sync with what’s captured via camera.

According to LG, the number of U+AR users reached 392,000 recently, and the number of views for the AR videos reached 1.75 million, a 22 percent increase on year. The trend has in part been driven by the coronavirus outbreak, which has increased the average time per day spent on smartphones, combined with aggressive promotional events the company conducted to benefit from the momentum.

At-home workout routines have been a popular AR service already offered by the app. About 250 videos use AR visuals to help users with their workout positions. The number of monthly active users of the workout videos grew 38 percent between January and March, while the overall number of video plays doubled.