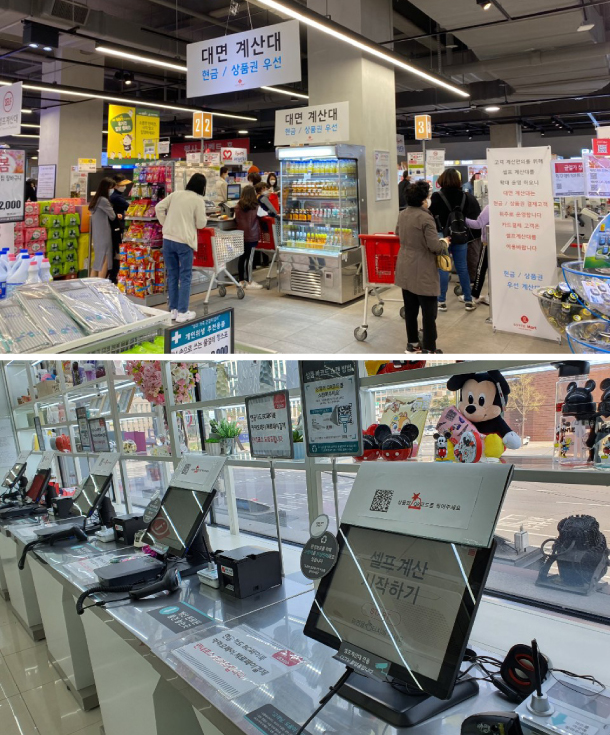 The phasing out of cashiers at major retail stores in Korea is accelerating as the coronavirus-driven fear of contagion prompts more shoppers to head for the self-checkout lines.

The trend is in line with government recommendations that people practice social distancing, for which the term “untact” has become popular to describe no-contact interactions.

At Lotte Mart, one of the country’s largest retail chains, the number of self-checkout stations throughout its 120 stores had already risen by 16 percent this year, as of the end of March. The number of its stores equipped with the unmanned counters also increased since the end of 2019, from 46 stores to 50.

When the JoongAng Ilbo visited the retail giant’s branch in Seocho District, southern Seoul, last November, it had 10 cashiers. It’s now down to five cashiers and 22 self-checkout counters.

Many consumers still used their credit cards despite the guidance to “use cash and gift certificates” to minimize contact with the cashier.

“More than half of our customers are using the self-checkout counters,” said Oh Jeong-sang, vice president of Lotte Mart’s Seocho branch. “As more consumers are reluctant to make face-to-face contact due to new coronavirus fears, even the elders who are not used to automatic machines now prefer self-checkout.”

Lotte Shopping announced earlier that it will close more than 200 of its more than 700 branches, or about 30 percent. The closures, which will affect Lotte Department Store, Lotte Mart, Lotte Super and LOHB’s, a drug store chain, are aimed at cutting losses over the next five years.

As the company prepares to restructure, it will sort out its most competitive branches and close 40 percent of its Lotte Mart branches, a total of 50 stores. At the remaining branches, the trend to reduce cashier employees will continue, the company has said.

As of January, Emart, the country’s top retail company, has set up self-checkout counters at 95 stores, which is 66.9 percent of its nationwide total of 142 stores.

“As the innovative technology of the fourth industrial revolution combines with online technology, the labor force is changing from full-time to part-time or telecommuting,” Kim Ik-sung, a professor of business administration at Dongduk Women’s University, said. “The coronavirus outbreak has added fuel to the trend.”

Asung Daiso also recently changed Daiso’s Seoul City Hall plaza branch to a 100 percent self-checkout system. This three-floored store has only four people on duty, including one staff member at the information desk next to the self-checkout stand and three employees in charge of each floor.

“We are testing and running self-checkout counters at about 10 major stores to increase the efficiency of our work,” a Daiso official said. “It is difficult to make any assessment because we are still in the test phase.”

The company expects to expand the system to 1,350 stores in the future as a way to reduce fixed costs.

In another step toward using unmanned machines, people with cars are choosing the drive-through method to avoid visiting more highly populated places. The Coffee Bean Korea saw its drive-through orders rise 30 percent on weekends and 21 percent on weekdays between Feb. 23 to March 22, compared with the same period the previous month.

At the Hak-dong drive-through branch in southern Seoul, weekend and weekday orders grew 50 percent and 32 percent, respectively. In March, three drive-through stores were in the top 15 stores in Purple Order, its online ordering app.

As such, existing jobs will inevitably disappear from the retail industry. The impact on society is expected to be substantial, as cashier jobs require no special skills and experience.

“Untact consumption is expected to expand further because young people prefer using automatic machines rather than talking to others,” said Lee Eun-hee, a consumer studies professor at Inha University. “To prevent the elderly and other underprivileged people from experiencing difficulties, untact services should be provided with manned services for a considerable period of time.”

Untact delivery services are enjoying their finest hour amid the coronavirus outbreak.

“Safe delivery service,” which blocks contact with delivery workers, has become a symbol of consumption during the coronavirus outbreak. Domino’s Pizza said the proportion of customers selecting to prepay online orders increased from 50 percent in January to 65 percent in March. Last month, the company started its untact delivery service, delivering pizzas at the door of the delivery destination to avoid contact. Yogiyo, a delivery app, also reported a 481 percent increase in the usage of “safe delivery service” in March compared with February.

According to Baemin, the number of inquiries for its delivery service increased 75 percent in February from the previous month. That number rose by another 21 percent in March.

“The world will be divided into ‘before Covid’ and ‘after Covid,’” Seo Yong-gu, a professor of business administration at Sookmyung Women’s University, said. “The most fundamental change caused by the coronavirus will be untact services.”

She added, “The technology will evolve into a touchless service that uses face recognition technology requiring no manpower.”