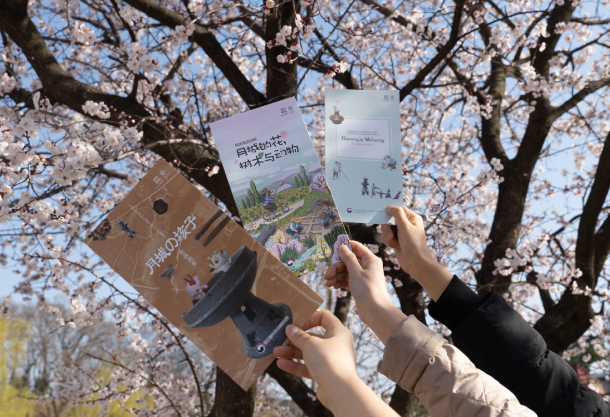 Leaflets about Wolseong in English, Japanese and Chinese will be available next week at the Unesco heritage site in Gyeongju, North Gyeongsang. [CULTURAL HERITAGE ADMINISTRATION]

Wolseong, a Unesco heritage site in the North Gyeongsang city of Gyeongju, where the royal palace was located during the Silla Dynasty (57 B.C. to A.D. 935), will have more materials in English and other languages on site beginning next week.

Korea’s authority on heritage sites, the Cultural Heritage Administration (CHA), announced Wednesday that leaflets in English, Chinese and Japanese will be available at the ruins and excavation sites of Wolseong.

“There will be four leaflets total, explaining the royal palace of Silla, the Wolseong excavation research, the Wolseong moat and about the flowers, trees and animals of Wolseong in the three languages,” the administration said in its statement.

The sites in Wolseong previously had short explanations in English but none detailing the excavation progress and the artifacts found at the site.

“We have had more foreign visitors in the area than before, and we have been providing tours in English, but sometimes pictures and infographics are much more valuable,” said Jeon Kyung-ho, an official at Gyeongju National Research Institute of Cultural Heritage, an affiliated organization with the CHA. “The leaflets will be available on site from as early as this weekend or by next week.”

The Wolseong site and other areas in Gyeongju were designated a Unesco World Heritage site in 2000 for being examples of Korean Buddhist art and also for the remains of temples and palaces from the Silla Dynasty.