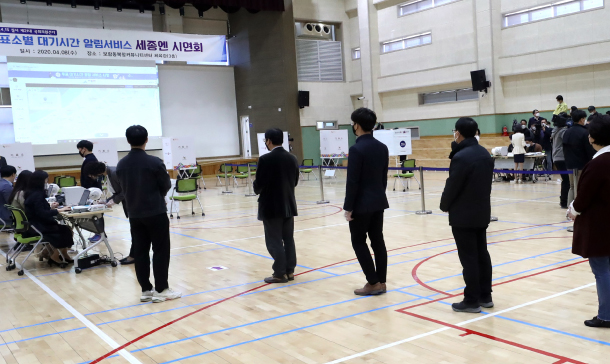 Voters maintain a 1-meter (3-foot) distance from each other in a demonstration of how to cast ballots in a pre-poll station setup at a community center in Sejong City on Wednesday. [NEWS1]

The government on Wednesday began preparations for early voting for the April 15 general elections, scheduled for Friday and Saturday.

The National Election Commission (NEC) said Wednesday that it will operate 3,508 pre-poll voting stations nationwide. Among them, eight will be opened inside government-run facilities where patients with mild cases of the coronavirus are receiving treatment.

As of now, 16 such centers are being operated nationwide for patients in less critical conditions, but only eight facilities in Seoul, Gyeonggi, Daegu and North Gyeongsang will have the special voting stations.

According to the NEC, about 900 patients and medical professionals at those facilities will be able to cast their ballots during the early voting period, as of April 6. The number may vary depending on additional admissions and discharges.

The NEC said it will use a strict manual to operate the stations for the confirmed patients. Their voting hours and movements will be controlled, and voting stations and ballot boxes will be disinfected before being transported out of the centers.

According to the commission, ordinary voters can cast ballots at any of the 3,500 stations nationwide from 6 a.m. till 6 p.m. on Friday and Saturday if they wish to vote before April 15. They are required to carry a photo ID, but no prior registration is necessary. Locations of the pre-poll voting stations are available on the website of the National Election Commission.

The commission said it will conduct thorough disinfection of the voting stations. Disinfection operation will take place on Thursday before the early voting starts and after Friday’s voting ends.

According to the NEC’s preventive measures, voters are required to wear face masks. To enter a voting station, the NEC will conduct a temperature check. After passing the initial screening, voters will sanitize their hands and wear disposable plastic gloves to mark their ballots.

If a voter fails to pass the temperature test, he or she will be asked to use a special voting station separately set up outside the regular voting area. After such voters use the station, the authorities will disinfect it.

Anyone with a high temperature or exhibiting other symptoms of possible coronavirus infection on the day of voting is asked to cast a ballot at the special station and then visit a regional public health office to be tested.

The NEC also asked voters to refrain from chatting inside the voting centers and to keep a distance of 1 meter between them when they line up. They are also asked to follow the directions of NEC officials.

Voters with young children are requested to not bring them to the polling stations. They are also asked to wash their hands with running water for 30 seconds before and after voting.

“This is the first time we are holding an election during an outbreak of an epidemic,” Vice Health Minister Kim Gang-lip said Wednesday. “The government must do its best to guarantee the voting rights of self-quarantined people.”

“Because it is highly likely that many of them are infected, we are trying to find a way to minimize the risk of spreading the disease when they go out and cast ballots,” Kim said, adding that the NEC and the government are at the final stage of their consultation to announce a plan.

A plan to lift the self-isolation measure briefly for the concerned voters to allow them to travel to cast ballots is under consideration, sources say. The NEC and the government want to create a special window of voting time for people under self-isolation outside the regular voting time from 6 a.m. till 6 p.m.