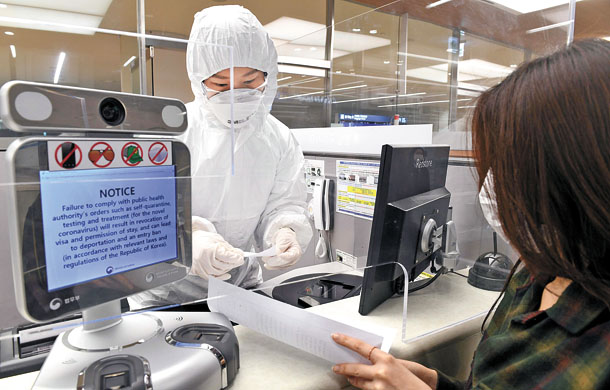 An official in full protective gear explains self-isolation guidelines to an arrival from abroad at an immigration checkpoint in Incheon International Airport on Wednesday. [YONHAP]

Chung also said the government will expand entry restrictions on foreigners traveling for nonessential reasons as he convened a meeting of the Central Disaster and Safety Countermeasures Headquarters that morning to discuss ways to contain the coronavirus at the Sejong Government Complex.

“While maintaining the basis of openness, the government will strengthen [entry] restrictions in accordance to the principle of reciprocity,” Chung said.

This comes as the world has gone into lockdown mode because of the coronavirus pandemic, with over 1.43 million cases and 82,000 deaths as of Wednesday.

Korea, which saw a spike in coronavirus cases earlier than most other countries, is believed to have flattened the curve of infections with around 50 new cases per day this week. But it says it is too early to let down its guard and has bolstered efforts to prevent cluster infections and imported cases.

There are 148 countries and territories with some form of entry ban on Korea as of Wednesday, according to Seoul’s Ministry of Foreign Affairs. Of these places, 120 have bans on all foreign visitors.

There are only a handful of countries without some form of entry ban on Korea including the United States, Britain, Mexico, Venezuela, India, Cambodia and Bangladesh.

Korea’s latest travel restrictions will apply to 88 countries and territories. This includes 54 countries with visa waiver agreements including Thailand, Russia and France and 34 countries with reciprocal visa-free entry programs such as Canada and Australia.

There are currently 116 nationalities that can enter Korea without visas through either of those mechanisms.

Similarly, nationals from 47 countries are permitted visa-free entry and can visit Korea for up to 90 day. They include the United States, Australia, Saudi Arabia, Qatar, Argentina and South Africa. Canadians are allowed to stay six months.

Countries in those two categories that have not imposed an entry ban on Korea are likely to be exempt from the latest restrictions, including the United States, Britain, Mexico and Venezuela.

In March, Tokyo announced the suspension of the visa-waiver program for Koreans among other new travel restrictions, and Seoul suspended its 90-day visa-free entry program for Japanese visitors.

There have been calls for stricter entry restrictions on visitors to Korea amid concerns of imported cases as the number of domestic cases decline.

Chung said Wednesday that the spread of the virus across Europe, the United States and possibly Japan and other Asian countries is “problematic.”

Of the 53 new cases Tuesday, 24 cases were travelers, of which 20 were Koreans and four were foreigners.

The suspension of visa waivers and the visa-free program stops short of an entry ban.

The latest travel restrictions come just a week ahead of April 15 general elections.

Korea in early February implemented a travel ban on foreign travelers coming from Wuhan in China’s Hubei Province, the original epicenter of the coronavirus.

The situation has escalated rapidly since the World Health Organization declared a global pandemic on March 11 and there was an exponential spike in confirmed cases in Europe and then in the United States.

Seoul has resisted domestic calls to expand entry bans to all of mainland China and, as the virus spread, to foreign visitors from other heavily-hit countries.

Instead Korea introduced a special entry procedure to monitor the health conditions of travelers from abroad including a health questionnaire and downloading a mobile app. More lately, it started requiring mandatory two-week quarantines for visitors.

From April 1, the government has required all travelers coming into Korea to undergo a mandatory 14-day quarantine, the incubation period of the virus.

Foreign visitors have to pay around 100,000 won ($82) per night to stay at a government-designated facility during this quarantine period. Seoul is also deporting foreigners who do not cooperate with quarantine measures.

However, there are still on average over 5,000 travelers coming into Korea per day, though over 80 percent are Korean nationals. According to Ministry of Justice data, on Tuesday, there were 5,073 travelers who entered Korea, of which 3,811 were Koreans, 206 Americans and 57 Europeans.