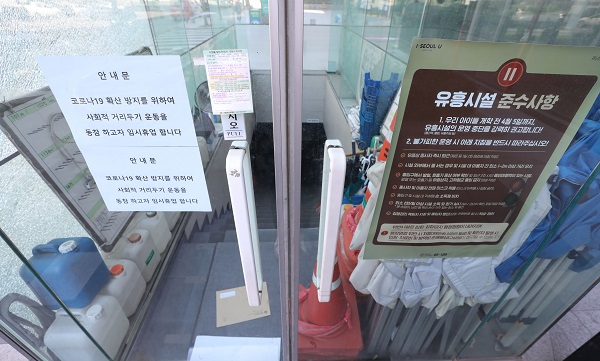 A hostess bar in Gangnam District, southern Seoul, is closed on Wednesday after a woman who worked in the bar tested positive for the coronavirus. [YONHAP]

All hostess and karaoke bars and other nighttime entertainment establishments in the Korean capital have been shut down until April 19 after a woman who tested positive for the coronavirus last week was found to have worked in a hostess bar — and had contact with over 100 people.

Officials believe the 36-year-old employee of a large hostess bar in Gangnam District, southern Seoul, was infected by a relatively obscure K-pop star who goes by the stage name Yoonhak. The 35-year-old, whose real name is Chung Yoon-hak, tested positive on April 1 after returning from Japan.

So far, only the patient’s 32-year-old roommate, who also works at the hostess bar, has been infected.

Seoul Mayor Park Won-soon announced Wednesday in a press conference that 422 clubs, hostess bars and other establishments that have been open in Seoul - in what is called the “entertainment industry” in Korean - will be forced to close until April 19, the end of the government’s so-called high-intensity social distancing campaign. They include nightclubs in Hongdae and Sinchon, western Seoul, but not ordinary pubs and bars.

The Gangnam hostess bar in question has been shut since last Thursday, the day the 36-year-old hostess received her positive test results.

Seoul’s administrative order came as the Korea Centers for Disease Control and Prevention (KCDC) announced that 53 people were newly infected with the coronavirus Tuesday, up from 47 on Sunday and Monday.

By Tuesday midnight, 200 people had died, up by eight from the previous day, while 6,776 people had been declared fully recovered, up by 82 from the day before.

Of Korea’s 53 new cases, 24 were imported from a foreign country. Among the nation’s 10,384 total, 832 people, about 8 percent, were imported, mostly from Europe and the Americas.