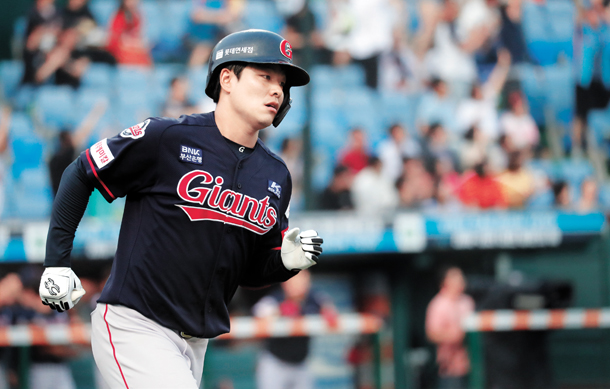 The Lotte Giants’ new captain Min Byung-hun is not afraid to take a tough approach with his younger teammates. He’s happy to play the bad guy role and criticize their performances if need be.

After the 2019 season ended, the Giants appointed a new manager, Her Mun-hoe, and he has assigned a new captain, Min. His reputation was formed all the way back at the beginning of the year, when he didn’t hesitate to express his disappointment toward younger players at a public event.

“Young players should not be [playing or acting like] veterans,” Min said back when the Giants held their inaugural ceremony of the club’s new president in the beginning of this year.

His comment came as quite a surprise as such criticisms are normally revealed privately, not publicly. But Min stood by his decision and said he made the remark as he didn’t see the younger players working hard enough.

“Back when I was young, we worked really hard, like we were spiteful,” Min said at Sajik Baseball Stadium on Tuesday. “Even if our career got shorter because of injuries, I wanted to get something done.”

Min says his disapproval stems from the lack of any extra training the younger players do after the team’s scheduled training is completed. The Giants reduced the amount of team training hours after Her got appointed as manager, as he encourages his players to get the work done and learn abilities by themselves.

By minimizing the hours of team training, Her tried to provide an atmosphere for his players to work on what they each individually need to improve on. The players struggled with this system in the beginning but have since gotten more accustomed to it. And Min too has noticed this change and taken a softer stance compared to his harsh remarks at the beginning of the year.

“It’s definitely different than last year,” Min said. “I was thankful to the way the younger players have changed.”

Behind Min’s criticism was the Giants’ struggle last year. In the 2019 season, the Giants finished dead last in the regular season standing with 48 wins and 98 losses, with a disappointing 0.340 winning percentage. It marked the first time in 15 years that the Giants finished in the last spot.

But it wasn’t just the team’s overall ranking that stung. He was also disappointed in his own performance. In the beginning of the season, Min missed 43 games after getting hit by a pitch during a game in April. His absence was a big disappointment as the Giants were off to a great start and he had the highest wins above replacement (WAR), at 3.53 among the fielders with the Giants. After he was out of the Giants’ starting lineup, the club quickly fell down the rankings.

“I thought about what would have happened if I didn’t get injured,” Min said. “I was stressed at one point because I thought it was my responsibility.”

Due to the injury, Min finished the season with a 0.304 batting average with nine home runs and 43 RBIs throughout 101 games.

Entering his third season with the Giants, this time as a captain, Min has made his own improvements. Over the winter, he gained weight and fixed his swing form to make bigger hits. Finishing a season with nine home runs may be because of the KBO’s new baseball, as in 2018, he finished his first season with the Giants with 17 home runs. The nine-home-run tally was just one home run shy of allowing him to finish with two-digit home runs for six straight seasons.

“I worked hard on building my body,” Min said. “There were times when I wanted to give up, but I fought through it.”

Despite spending the winter gaining muscle to be a slugger, right ahead of the season opener, which was originally scheduled to start on March 28, he made changes to his plan.

“As I gained power, I started to lose speed,” Min said. “I felt how my instant movements have gotten slower. So I changed my swing back to the way it was.”

He reached the conclusion that rather than home runs, he needs to be good at things the team needs: stealing bases and defense.

Due to the coronavirus outbreak, the KBO’s 2020 season has been suspended indefinitely, and it’s likely to start in May. The delay has somewhat worked to Min’s advantage as he has more time to adjust to his new plan.

But just like any other players, Min is also desperate to see the fans out at Sajik Baseball Stadium in Busan.

“At baseball stadiums, the seats are really close to each other,” Min said. “If we see one fan testing positive, then they’ll put all the players, officials and the fans in danger. So I understand [this situation]. But there are fans waiting for us, so I want to be out on the ground as quickly as possible.”