Investments for a world where all is falling

Investments for a world where all is falling 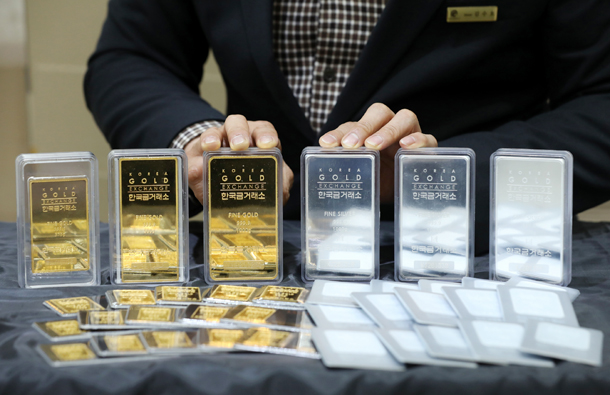 Gold bars at the Korea Gold Exchange in Jongno District, central Seoul. Gold prices have been fluctating amid the new coronavirus outbreak. [YONHAP]

Investors, stuck between the rock of low interest rates and the hard place of crashing markets, have nowhere to go. Wherever they turn, they face potential underperformance or real losses.

For some, the solution has been the stock market. It’s officially a bear, down 20 percent from the recent high, but punters believe that they can either catch the bottom and ride a recovery or get in and out of a sucker’s rally ahead of the greater fool.

They are often called ants, and their existence is evident in the increase in the number of brokerage accounts: up almost 5 percent on year in March.

In a recent survey conducted by a job search website Incruit, 55.7 percent responded they have invested in stocks over the past month. The reason is one more of desperation that optimism.

“In the zero interest rates era, fixed-deposit accounts and installment savings do not make good profits,” was the third mostly popular answer among the survey respondents.

Korea also has its nomad investors, quite different from the ants. They rush from one safe investment to the next looking for a return without risking the principal. It’s a challenging strategy as they move to various money market funds (MMF) and bank accounts, and sometimes scurry to gold.

Gold as a safe asset 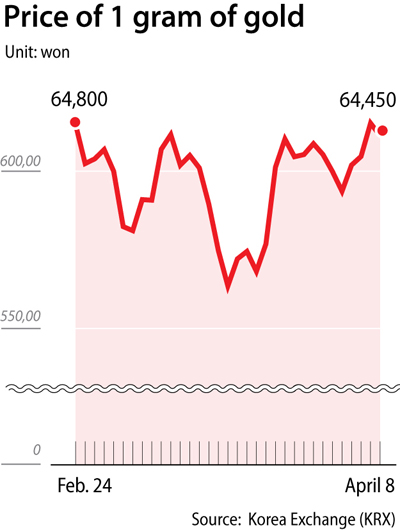 Gold hasn’t performed very well lately, but it has nevertheless done better than some other options and has the potential to protect capital should the situation worsen in the markets.

On Feb. 24, when the coronavirus infection began to spread, gold was trading at about 64,000 won ($53) a gram, according to the Korea Exchange. It is now at the same level. It is has not risen, but it not fallen. That is relative outperformance.

The bars have been flying off the shelves.

Gold can be traded on the KRX spot market by creating an account. The transaction unit is 1 gram, and purchases are value-added tax (VAT) exempt, but the 10 percent VAT is due on withdrawals.

Market analysts say that, despite the increased volatility of gold prices, it is still worth investing in the safest of safe assets.

“Prices of various financial assets plunged as securing liquidity emerged as a top priority,” said Park Kwang-rae, analyst with Shinhan Investment. “But the investment in the gold exchange-traded funds [ETF] has been relatively solid despite the recent temporary plunge in gold prices.”

“It is because gold still plays an important role as a safe asset,” Park added. “Gold will have positive returns as volatility in the financial market may continue depending on the progress of the coronavirus outbreak.”

Investors are also looking at MMFs, which pay interest on short-term deposits.

MMFs are financial instruments that invest in short-term products, such as treasury bonds and commercial paper (CP). Deposits and withdrawals are possible on demand.

In general, MMF investors tend to increase when the financial market uncertainties increase and relatively high interest rates are sought.

At the end of February, when coronavirus fears hit the market, MMFs had 143.6 trillion won in assets, up around 40 trillion won from 104.9 trillion won reached a year earlier.

That level was the highest ever month-end reading.

SBI Savings Bank’s Saida Bank Deposit Account provides an annual interest rate of 2.0 percent. If funds are withdrawn before maturity, the customer receives interest up to the point of the withdrawal. A total of 300,000 clients had bought the product as of the end of February even without any advertising or marketing. The balance has broken 1 trillion won.

OK Savings Bank’s OK Safe Deposit Account is capped at 200 billion won. Although the subscription period is three years with an annual interest rate of 2.1 percent, the same rate will be applied if the customer withdraws the fund after one year. A total 50 billion won was sold on the first day when it was released on March 23 and 165 billion won by April 2.