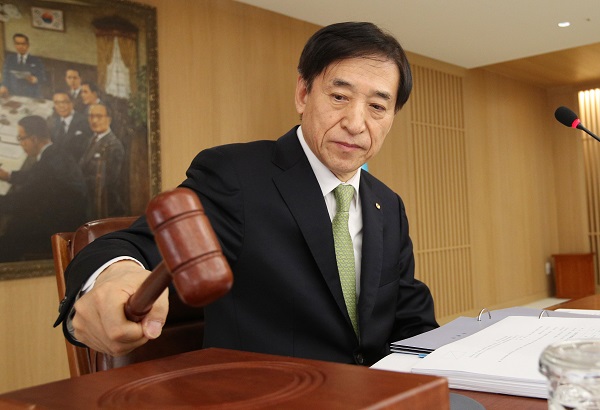 Bank of Korea Gov. Lee Ju-yeol chairs the monetary board meeting on Thursday

Korea’s central bank held the base rate at 0.75 percent Thursday, saying it would watch the market as it processes the latest stimulation measures, including a big rate cut last month.

The Monetary Policy Board at the Bank of Korea decided Thursday at a regular meeting to maintain the base rate at its current level, which is a record low, after going for an unexpectedly big cut - 50 basis points - last month as the coronavirus pandemic causes global market panic.

Out of seven members of the board, Cho Dong-chul and Shin In-seok dissented and voted for a 0.25 percentage points cut.

“Although inflation and growth rates are expected to fall short of the existing outlook by a large margin as the Covid-19 spreads across the world, [the BOK] decided that it would be better to wait and see the effects of fiscal, financial and monetary policies before taking the next step,” said BOK Gov. Lee Ju-yeol at the online press briefing.

The central bank also estimated that 2020 economic growth will “largely fall short” of the 2.1 percent it forecast made in February, which was already an adjusted number taking the global pandemic’s impact into consideration. The BOK had forecast in December that the Korean economy will grow by 2.3 percent this year.

“The growth rate not only for Korea but for the whole world largely depends on the progress of the coronavirus,” said Gov. Lee. “On the premise that the disease will show signs of relief in the second quarter and the economy will start recovering to normal levels in the third quarter, [the BOK] still expects Korea’s 2020 growth rate to be above zero.”

It added special bank bonds such as those issued by Korea Development Bank and Export-Import Bank of Korea as well as mortgage-backed securities to a list of bonds it can purchase to boost liquidity for the financial industry.

“The possibility of an additional cut by the BOK is not completely eradicated,” said Shin Dong-soo, an analyst from Eugen Investment & Securities. “But that would only be after seeing the effect of the latest liquidity relief measures.”