With no school lunches, produce piles up by the ton

With no school lunches, produce piles up by the ton 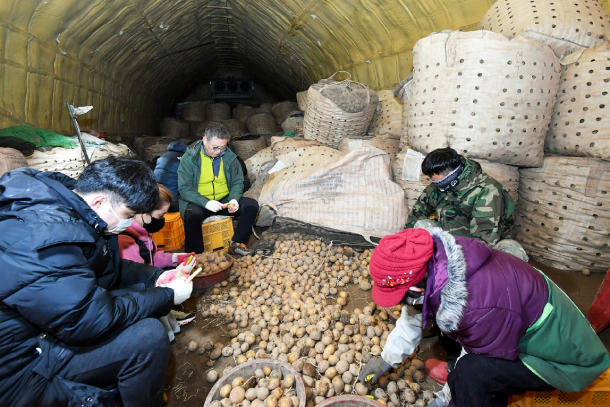 In a normal year, Kim Jong-sik would now be busy running around his 1,650-square-meter (17,760-square-foot) farm, hustling to harvest the organic broccoli, cabbage and radishes he grows and sells to local school cafeterias, the agriculture industry’s largest individual customer.

But then came the coronavirus outbreak and the nationwide closure of public schools, which has many farmers who depend on those large, consistent contracts increasingly nervous about how they’ll make ends meet. Kim’s spinach crops were already supposed to be on students’ lunch trays by this point. Instead, they are rotting in one of his greenhouses, along with two tons of radishes.

“I lost all my clients after the coronavirus forced schools to move their classes online. The vegetables will rot if I keep them any longer,” said Kim. “I don’t know what to do right now, since no one can guarantee when schools will open again. If online classes continue on longer, it will put another batch of hard-earned greens to waste.”

The 56-year-old says he’s already given up on this year’s harvest and is considering plowing over his crops to plant the next season’s seeds. Kim said he’s had no income for months and was recently forced to borrow 40 million won ($32,800) from the bank.

Nationwide, hundreds of tons of produce are rotting in warehouses. One of the hardest-hit regions is the heavily agricultural province of Gangwon, where so many unsold potatoes are piling up that its Gov. Choi Moon-soon recently took to social media in an attempt to sell them himself.

He reportedly sold 45,000 boxes in seven seconds but hardly made a dent in the total. The potato surplus has hit an estimated total of 230 tons nationwide.

The crisis spans a multitude of different crops, as farmers struggle to find new markets to make up for losses generated from schools.

Organic thistle farmer Cho Eun-hyeon, 55, said she supplies half of her produce to elementary, middle and high schools in the Gangwon region. Her crops are typically cooked with rice or used to make Korean side dishes.

She said this is the first time in her six years of farming to have three tons of harvested greens sitting idle in the cold storage.

She only managed to sell 50 kilograms (110 pounds) of thistles for this year, less than 1 percent of her surplus.

The sale was so low she had to pay with credit to afford farming equipment for the next year. She said she’s unsure if she’ll be able to pay the bills this month.

Members of the Sansoro Nature Cooperative, located in Hoengseong County, Gangwon, are scratching their heads as they deliberate what to do with the 40 tons of the region’s famous potatoes sitting unsold in their low-temperature warehouses.

The cooperative, which consists of nine farms, supplies 40 percent of its potatoes to school cafeterias. Already the farmers say their incomes have been cut in half, and the cooperative recently took out a 350 million won loan to enable its members to seed their farms for next year.

For many farmers, that’s the only option to keep from going under, according to Lee Bong-pil, the head of a local farming association. Potato farmers need to start seeding now in order to harvest their crops in July and August.

But even that might go to waste, if online classes continue until the summer.

The biggest victims have been potato farms, with a total 230 tons of leftover produce. Given their prominence in school lunches, spinach and carrots have also taken a substantial hit.

The Gangwon regional government has responded by putting excess produce up for group purchase. The Gangneung Agricultural Technology Center partnered with Hanaro Mart in Gangneung, Gangwon, and sold eco-friendly fruits and vegetables in bulk three times since last month.

“After schools moved their classes online, we are trying to come up with various solutions to help struggling farms, by giving financial support and discovering new markets to sell Gangwon-grown produce,” said an official from the agricultural management service. “We will continue to help farmers until the outbreak goes away.”