New infections of the coronavirus dropped to 39 Wednesday, the lowest daily figure since cases began to soar in mid-February after a major cluster was traced to a church in Daegu.

As local health officials try to push the number down by imposing strict penalties on violators of government quarantine orders, the Ministry of Justice announced that a 40-year-old Indonesian man was slapped with a 500,000 won ($411) fine and deported from Korea Wednesday afternoon after leaving a residence and lying to officials about it.

It was the first deportation of a foreigner for wandering around during self-quarantine.

From April 1, all Koreans and foreigners arriving in Korea from overseas have been forced to self-isolate either in their homes or government-run isolation facilities for 14 days, the incubation period of the coronavirus, except for a few specific visa categories coming for short-term stays, such as diplomats and foreign government officials. 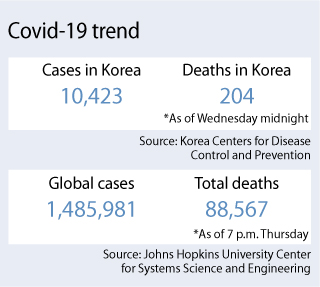 A number of other foreigners have been busted for roaming around, and the Justice Ministry said they were being considered for deportation as well.

As for the drop in infections, local health officials Thursday thanked members of the public for participating in the government’s so-called high-intensity social distancing campaign, saying the endeavors were definitely helping.

Korea once had the second most coronavirus cases in the world after China, but now it’s 17th on the list of affected nations with 10,423 total cases. By Wednesday midnight, 204 people had died, up by four from the previous day, while 6,973 people had been declared fully recovered, up by 197 from the day before, according to data from the Korea Centers for Disease Control and Prevention (KCDC).

Of Wednesday’s 39 new cases, 23 were traced to a foreign country. Among Korea’s 10,423 overall cases, 861, about 8.3 percent, have been imported from abroad, mostly from Europe and the Americas.

Korea’s daily new infections had ranged between 78 and 125 last week before dropping to 47 on both Sunday and Monday, 53 on Tuesday and dipping to 39 Wednesday.

Vice Health Minister Kim Gang-lip said Thursday in a press briefing that the government’s key goal is to strengthen control over the nation’s “preventive net” by minimizing the number of untraceable infections.

“Thirty-nine patients is a low we haven’t experienced in the past month and a half,” said Kim. “But on one hand, I’m still concerned. As a public health official, I have no other choice but to say that now’s not the time to feel at ease, and I’m concerned [the figure] may send too much of a positive message.”

As for the deported Indonesian, the Justice Ministry said in a press release Wednesday that the 40-year-old had arrived at Incheon International Airport last Saturday and agreed to self-quarantine at a residence in Ansan, Gyeonggi, where he previously lived while working at a restaurant as a chef.

Instead, he headed straight to an acquaintance’s house in Gimcheon, North Gyeongsang, without telling officials. The ministry said officials in Ansan caught onto the transgression after cooperating with police and informed the Korea Immigration Service on Sunday, which dispatched a team of officials to Gimcheon to track him and put him in custody.

The Indonesian was transferred to a detention facility of the service’s Daegu office and subsequently escorted to Incheon International Airport on Wednesday to be put on a flight for Indonesia at 3:20 p.m.

The ministry warned of tough penalties for foreigners who disobey the self-quarantine rule, saying they could face deportation like the Indonesian.

The Seoul Metropolitan Government said Thursday that no additional infections have been traced yet to a hostess bar in Gangnam District, southern Seoul, that was shut down April 2.

All hostess and karaoke bars and other nighttime entertainment establishments in Seoul have been forced to shut down until April 19 after a woman who tested positive for the coronavirus last week was found to have worked in the Gangnam hostess bar and had contact with at least 118 people.

April 19 is the deadline for the government’s current high-intensity social distancing campaign.

Officials believe the 36-year-old female employee was infected by a relatively obscure male K-pop star who goes by the stage name Yoonhak. The 35-year-old, whose real name is Chung Yoon-hak, tested positive on April 1 shortly after returning from a Japanese business trip.

It turned out she went to the hostess bar a day before she began exhibiting symptoms of the coronavirus and had contact with at least 118 people, including colleagues and customers. They all have been told to self-isolate.

Seoul Mayor Park Won-soon told a KBS radio show Thursday that among 118 people who had close contact with the 36-year-old hostess, 76 received their test results and only the hostess’s roommate, who also works at the bar, turned out positive.

On reports that several customers and workers at the hostess bar were refusing to cooperate with epidemiologists, Park warned that anyone who lies or intentionally omits a fact about their whereabouts can face up to two years in prison or up to 20 million won in fines.

In Pyeongtaek, Gyeonggi, officials said they were planning to sue a wine bar owner in her 40s who’s of American nationality and Korean descent for causing “immense damage” to the local community by opening her bar and socializing with other people last month shortly upon returning from the United States despite feeling symptoms of the coronavirus.

She was eventually diagnosed as infected on April 1, and at least 18 people with whom she had contact tested positive so far.