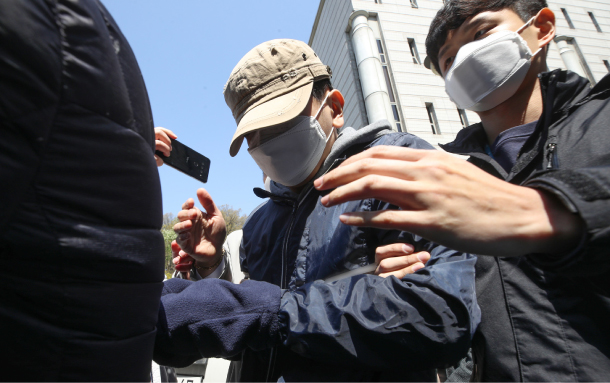 An 18-year-old surnamed Kang, left, who went by the online alias Butta, walks out of a warrant hearing at a local court in Seoul Thursday. Kang is believed to be one of Cho Ju-bin’s co-conspirators of the pornographic chat rooms on Telegram. [NEWS1]

The state prosecution service announced Thursday it has strengthened sentencing recommendations for suspects involved in the creation of videos depicting sexual exploitation in an attempt to clamp down on growing digital sex crimes in the country.

The Supreme Prosecutors’ Office said it has drafted new guidelines for prosecutors investigating such crimes that would be applied to all ongoing cases, including those linked to an exposed online pornography ring that enslaved dozens of women and minors.

According to the new rules, suspects involved in making pornography depicting sexual activities carried out against free will, or involving minors, will be recommended for immediate detention, regardless of the degree of their involvement.

Prime suspects in such cases are to be recommended for sentences of at least 15 years in jail, or at maximum life imprisonment.

These new guidelines are meant to address the massive public outrage stemming from the exposure of the illegal pornography ring allegedly operated by prime suspect Cho Ju-bin through the messenger app Telegram, said a prosecutorial spokesperson.

“We regard the situation extremely seriously and decided to strengthen guidelines after coming to the conclusion that it would be difficult to effectively respond to new forms of digital sex crimes under existing rules,” the spokesperson added.

According to the National Police Agency, which has been carrying out a nationwide crackdown on digital sex crimes following the Telegram bust, a total of 221 suspects have been identified so far. Among them, 32 have been placed under pretrial detention.

Of the 221 suspects, 76 percent - or 168 people - were found to be in their teens or 20s, police said. A majority of the victims were also in the same age category.

Cho, believed to be the mastermind behind one of the biggest, and certainly the most notorious, of these pornography rings, has been under custody since last month, and is set to be indicted next week. One of his alleged co-conspirators, an 18-year-old surnamed Kang who went by the online alias Butta, underwent a warrant hearing at a local court in Seoul Thursday.

The suspects are accused of blackmailing women into sharing sexual photographs and videos of themselves, which were then distributed in the Telegram chat rooms to around 15,000 paying members through cryptocurrency transactions, according to police.

At least 103 people, including 26 minors, have been identified as victims so far.

With an enraged public calling on authorities to release the identities of paying consumers of the Telegram chat rooms, an online vigilante group calling itself “the Scarlet Letter” released the names and private information belonging to around 200 people it claimed were paying members or operators of the pornographic chat rooms.

The group, which also operates on Telegram, notably claimed that a police officer in Busan had accessed one of the chat rooms but had left after his identity was revealed. The officer in question denies the allegations.

But accusations have also emerged that the group may have falsely accused a variety of other people, and that its own operators may be involved in digital sex crimes. Police said it was investigating the vigilante group as well as those it has accused.