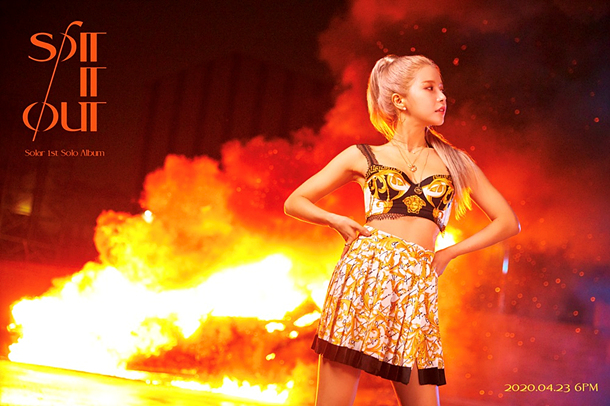 Solar of girl group Mamamoo will make her first solo debut this month, announced her agency RBW on Friday.

"Solar will begin her solo promotions starting with her debut single 'Spit It Out' on April 23," the agency said.

This is the first time for Solar, leader of K-pop quartet Mamamoo, to drop an official solo release since her debut with Mamamoo in 2014.

She had released remake tracks of past songs, but this marks her first official solo project.

Solar flaunted her charisma while leading the group, while also hitting the high notes with her vocal talents.

She wrote the song "Star Wind Flower Sun" (2018) for the first time for Mamamoo's sixth EP, proving her skills as a songwriter too. She has since contributed to the group's albums with her own songs including "Hello" (2019) and "I'm Your Fan" (2019).

"Solar has prepared the as well as she can to show the best to the fans for her first solo debut. We ask for your love and support," the agency said.