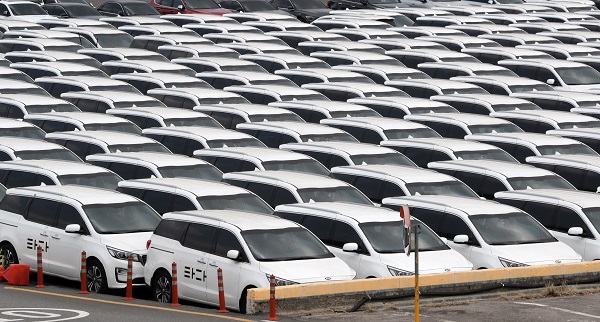 VCNC’s popular Tada Basic service will no longer run after midnight, after being available for more than a year. It will be keeping other riding services, like Tada Premium.

It is a month after the National Assembly on March 6 approved revisions to the Passenger Transport Service Act, which restricts the outsourcing of drivers for the use of rental vans with 11 to 15 seats to touring purposes only.

Socar Chief Operation Officer and VCNC CEO Park Jae-uk, on Thursday apologized to drivers and users for having to end the service.

“As mentioned, the Tada Basic service will be suspended for an indefinite period,” wrote Park in the apology. “I don’t have much to say [about the service suspension], but we are no longer able to allocate Tada Basic vehicles. Hearing about a ban on Tada was like hearing thunder from out of the blue. I thought we’d have to endure at least a month for Tada users and drivers who would suddenly lose their jobs.”

VCNC’s plan was to find a replaceable business model, but it was deterred by the spread of Covid-19. The virus kept people indoors and lowered demand for the ride-hailing service.

“We had put in a great effort to come up with a new business model, but couldn’t. We couldn’t get new investment, and the piled-up debt put VCNC in its worst state,” said Park.

Tada Premium requires a taxi driver’s license to provide the service. Tada Air and Tada Private only operate during certain hours, and therefore, are not against the law.

After it launched in September 2018, Tada Basic managed to accumulate 1.7 million users in just a year.

VCNC refused to reveal the portion of sales incurred from Tada Basic service.

Socar has 400 employees, and VCNC has 100 employees. The 1,500 Hyundai Carnivals used to provide Tada Basic services are also being sold.
Amid the challenges, Tada is also facing legal disputes.

The organization has started recruiting litigators. It plans to take legal action when at least 100 drivers are recruited.

More than 90 percent of Tada drivers freelance as private business operators. If they are accepted as a worker, however, VCNC may have to pay them severance. The standard is based on worker management, supervision and the intensity of work.

“Considering the work, the working hours and locations, the supervision and work expectations are beyond what one would expect for a freelancer,” said the organization in front of the Seoul Central District Prosecutors’ Office on Thursday.