Citizens turn out in record numbers to cast early votes

Citizens turn out in record numbers to cast early votes 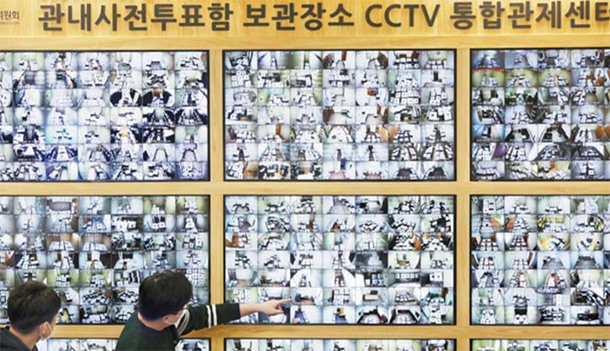 Early voting for the April 15 general elections was record-setting, according to the National Election Commission (NEC) Saturday, despite the ongoing pandemic and the maintenance of policies that call for social distancing.

The early voter turnout rate, which is the ratio of the number of people casting ballots ahead of the elections to the total number of eligible voters, was 26.69 percent.

Over 11.74 million citizens voted at 3,508 polling stations nationwide over the two-day early voting period that started Friday and closed at 6 p.m. Saturday, the NEC said. This means that around one in four eligible voters cast their ballots early. There are nearly 44 million voters eligible for the general elections.

South Jeolla recorded the highest turnout for early voting, with 35.8 percent, followed by North Jeolla, at 34.8 percent, and Ulsan at 32.4 percent. In Daegu, the epicenter of the coronavirus outbreak in Korea, the early turnout rate was 23.6 percent. North Gyeongsang was at 28.7 percent, and in South Gyeongsang, it was 27.5 percent. The Jeolla area is traditionally considered liberal stronghold, and the Gyeongsang region is traditionally conservative.

Seoul was at 27.3 percent. Jongno District, where Lee Nak-yon, co-chair of the ruling Democratic Party (DP)’s election committee, and Hwang Kyo-ahn, chairman of the United Future Party (UFP), are facing off, recorded the highest voting rate in the capital, at 34.6 percent. Gyeonggi was relatively low, at 23.8 percent.

President Moon Jae-in and first lady Kim Jung-sook cast their ballots on Friday at a polling booth in Samcheong-dong, near the Blue House in central Seoul. Moon’s five-year presidency runs through May 2022.

While countries around the world have delayed elections amid the pandemic, Korea is proceeding with in-person voting as planned with the number of coronavirus cases generally fewer than 50 a day for the past week.

One polling station in Yongin, Gyeonggi, raised the alarm and closed early Saturday when an election supervisor showed signs of a fever, and voters were guided to a different site. The election official later tested negative for the coronavirus.

Voters likely showed up to cast advance ballots to avoid crowds on election day this Wednesday, as Korea continues its social distancing campaign. However these numbers also reflect high interest in politics, especially as the country gears up for recovery from the coronavirus crisis. With a high early voter turnout, analysts expect a high overall turnout.

For overseas voting, which took place from April 1 to 6, 40,858 of nearly 172,000 registered citizens living abroad voted, the lowest rate ever. Overseas voting was disrupted because of major lockdowns and suspended flights as a result of the coronavirus pandemic, making it difficult to run polling sites in affected countries. Polling was suspended at 91 sites in 55 countries. Even after the ballots were successfully cast, 18 sites in 17 countries had difficulties sending the ballots back because of a lack of available flights, forcing the votes to be counted overseas.

Candidates of ruling and opposition parties spent the last weekend busily campaigning for the heated race to elect the 21st National Assembly, which will have 300 lawmakers - 253 directly-elected seats and 47 proportional representatives.

The ruling DP and main opposition UFP especially focused their attention on the metropolitan area of Seoul and Gyeonggi.

According to a survey conducted by Gallup Korea on behalf of the NEC and released Sunday, 79 percent of eligible voters polled said they will “certainly” cast ballots. The survey was of 1,500 eligible voters nationwide between April 4 and 5.

This is up by 6.3 percentage points from two weeks ago in the first Gallup Korea and NEC survey, which was conducted from March 23 and 24, where 72.7 percent of respondents said they will definitely vote.

In the latest poll, 15.1 percent said they will vote “if possible,” which makes a total of 94.1 percent of respondents indicating they have intentions of casting ballots in the general elections.

Voters viewed political party as the greatest determining factor in casting their ballots, with 31.1 percent responding they will select the candidates based on the political affiliation, followed by those who look at policies and pledges (28.7 percent), individual capabilities (25.2 percent) and political experience (5.5 percent).

In a similar survey for the general elections to pick the 20th National Assembly in 2016, a third of respondents said the individual and their capabilities were most important, while 28.2 percent looked at policies and campaign pledges and 18.9 percent the candidate’s political party.

In the Sunday poll, 64 percent of respondents said they have decided on candidates, while 36 percent said they are still undecided.