Former MLB pitcher Aaron Brooks will stick to his strengths

Former MLB pitcher Aaron Brooks will stick to his strengths

As he gears up for his first season in Korea, former major league pitcher Aaron Brooks will look to keep his focus on what he can do on the mound, rather than on what opposing hitters can’t do. 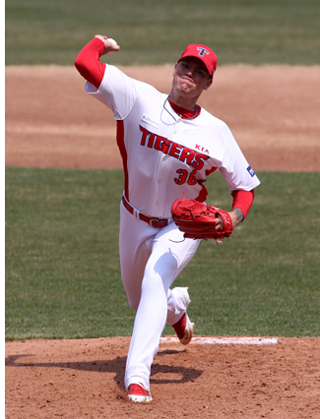 “I am not one to look at a whole lot of video from other hitters only because I try to stick to my strengths rather than the hitters’ weakness,” Brooks, the new right-hander for the Kia Tigers, told Yonhap News Agency in an email interview last Thursday. “Even though a hitter might show he can’t hit a certain pitch or doesn’t like certain pitches, [that] doesn’t mean I need to necessarily throw those pitches if they aren’t my best.

“Any hitter can hit any pitch at any given time,” Brooks continued. “So I try to learn as the game goes along because each night is different, and I’m a different pitcher than those from the video that those hitters were hitting off of.”

Like all other pitchers in the KBO, Brooks is limited to watching videos of hitters on opposing teams. Because of the coronavirus pandemic, the start of the regular season here has been pushed back from March 28. Clubs are only permitted to play intrasquad games without fans at their home parks and are banned from traveling out of town to face different teams.

Brooks, with 47 major league games to his name, has only been pitching against his Tigers teammates, but results have still been quite impressive. In 25 and two-thirds innings in spring training exhibition games and scrimmages, he has an ERA of 1.05.

Brooks said he prides himself on his ability to throw “a lot of strikes.”

“I am able to throw every one of my pitches for strikes, which keeps hitters guessing and off balance,” he said. “I’m also a ground ball pitcher, so whenever I get into a jam and need a double play, I can usually find a way to make that happen.”

Brooks’ numbers from the minor leagues, which offer a larger sample size than his big league career, back that up. In five Triple-A seasons covering 87 starts, Brooks issued only 1.9 walks per nine innings. Elite control artists keep that rate around 1.5 over the course of a season, and anything under 2.0 is still considered very good. In Brooks’ 181 professional starts at all levels, the rate is at 1.8.

“I believe I bring a lot to the table for the Tigers and expect to help us win many games this season,” he said.

If not for the Covid-19 pandemic, Brooks would have made at least a couple of regular season starts by now. The outbreak forced the Tigers to extend their spring training in Florida by several days, and with the preseason scheduled for mid-March also wiped out, the Tigers and all other teams have been alternating between practices and scrimmages.

Depending on how well Korea contains the virus in the next couple of weeks, the regular season could begin in early May. In the meantime, Brooks is trying to peak at the right time.

“It was a little difficult to change around my spring training routine because pitchers usually slowly get stretched out as far as pitches and innings go,” Brooks said. “We are currently still trying to figure out how to stay sharp and on schedule but still stay healthy because there are still questions about when the season will start. But I’ve just tried to lean on our coaching staff and just throw whenever they recommend.”

Indeed, Brooks has been getting plenty of help from his staff. Matt Williams, a former big league All-Star and the 2014 National League Manager of the Year, is the new skipper for the Tigers. Brooks pitched for the Oakland Athletics in 2018 and 2019 while Williams was their third base coach. The two also share the same agency, making it easier for Brooks to reach out to Williams, who’d signed with the Tigers about a month before the pitcher.

Brooks acknowledged that making the jump to the KBO “was not an easy decision” because of how much he’d enjoyed living out his childhood dream of playing in the majors. Having Williams as his manager “definitely made the signing easier,” Brooks said.

“Regardless of what team he was managing, I would always want someone like him in my corner,” Brooks added. “I had already heard there was some interest even before Matt was a part of the team, but having him as manager definitely helped ease my mind, and reassured me that it would be an amazing experience.”

Brooks has yet to truly experience the KBO. Pitching to teammates in a scrimmage at an empty stadium is a far cry from facing the league’s best hitters in a game that counts in front of a full house. Early regular season games will still be played behind doors for public health reasons, and there are plenty of baseball-hungry fans eagerly waiting for the green light to fill those seats.

“I just look forward to the good competition and the amazing fans that I’ve heard so much about,” Brooks said. “It seems like there is a love for the game here like no other, and I’ve heard the fans love to get as involved as possible. I feel like that makes for an awesome experience for both the fans and the players.”